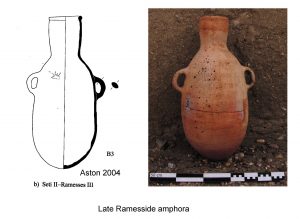 Tomb 26, newly discovered in cemetery SAC5 on Sai Island during AcrossBorders’ field season in 2015, is not yet completely excavated. Our work focused on a careful cleaning of its rectangular shaft – north-south aligned, it measures c. 2.60 x 1.80m with a depth of more than 5.20m. Several flood deposits were exposed and slight differences in the filling material will allow a detailed reconstruction of the use-life of the tomb. Obviously, there were several phases of burials, plundering and abandonment spanning the period from the late 18th Dynasty to Napatan times.

Besides a number of ceramics, including intact vessels, a total of 146 finds was recorded from the shaft filling of tomb 26. The majority are beads in different shapes and made of various materials (jasper, carnelian, faience etc.). The most important objects from the shaft filling are three sandstone fragments giving the name and title of the jdnw of Kush Hornakht who was active during the reign of Ramesses II (Kitchen 1980, 117-118; Budka 2001, 210-212 with further literature).

Several finds indicate a Ramesside burial in tomb 26. Among them there is the scarab SAC5 121, found just above the base of the shaft. This small intact piece made of steatite (17 x 8 x 13 mm) shows on the reverse a seated Maat, a recumbent sphinx with a double-crown and a winged cobra. 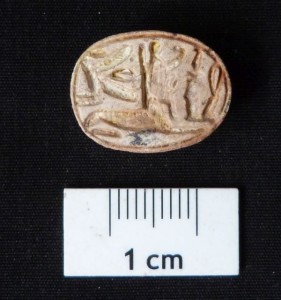 Parallels are known from the New Kingdom, especially the 19th Dynasty. A nice example was found in Amrit in Syria and is now in the British Museum (BM E48260). To the best of my knowledge, SAC5 121 is the first scarab with this motif found on Sai Island (see Minault-Gout/Thill 2012, pls. 115-118 for other scarabs from SAC5). 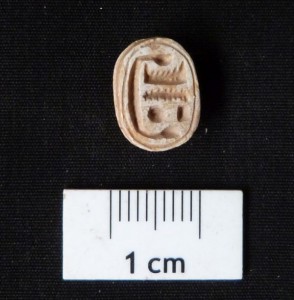 Another scarab, SAC5 120, of smaller size (12 x 6 x 9 mm) and perhaps also made of steatite, was discovered in the upper levels of the shaft filling of tomb 26. The reading of its reverse is not entirely clear, as is its date. To the left, a mn-sign above an n-sign, above two small signs, perhaps a sun-disc and stroke suggest a reading as “Jmn-Ra”. Is the boat-shaped sign to the right maybe just an irregular version of the j-hieroglyph (reed sign)? Or is it something completely different? Any suggestions are highly welcome! For me, the scarab SAC5 120 seems to post-date the New Kingdom. A number of Napatan vessels from the upper levels of the shaft filling suggest a use of tomb 26 during this period and the scarab might belong to this later phase of burials.

Prior to excavating the burial chamber of tomb 26, it is of course much too early to reconstruct a clear sequence of burials – nevertheless, the interesting material from the shaft allows us a to suggest a complex period of use covering several centuries.