Since a few days we have the confirmation that the burial chamber of tomb 26 opens to the north. Today, the excavation of the shaft was completed, reaching a depth of more than 5.20 m. 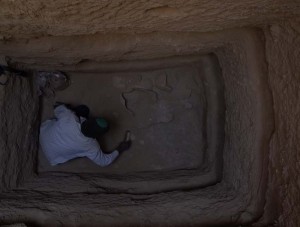 Cleaning remains on top of the shaft base of tomb 26.

The filling material of the shaft was highly interesting – especially in the lowest level just above the shaft base, two scarabs, a number of complete vessels as well as some stones (pieces of architecture) were found. Three nicely decorated, complete Marl clay pilgrim flasks are especially noteworthy, found together with other pottery vessels (especially storage vessels) and one complete stone vessel. 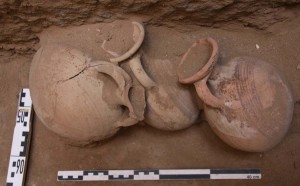 Three almost complete Pilgrim flasks were found together against the east wall of the shaft.

Since these finds were clustering along the eastern wall of the shaft and in particular in the southeastern corner, the most likely explanation is that remains of a burial were removed from the chamber in the north and left in the shaft during one of the phases of reuse (or possibly plundering?).

Probably the most important finds so far are two sandstone fragments with the name and title of the jdnw of Kush Hornakht. This official of the Egyptian administration in Upper Nubia is already well attested from Sai Island and was active during the reign of Ramesses II. Several of the vessels from the shaft of tomb 26 are datable to the 19th Dynasty, suggesting that the inscribed pieces actually belonged to one of the burial phases. Of course everything has to wait until we checked also the burial chamber and understand the complete picture of tomb 26 and its complex use life, but for now it is possible to say that we found traces of early Ramesside burials in SAC 5. This is extremely exciting and opens much room for new thoughts about the importance of Sai during the Nineteenth Dynasty and its relation to the now flourishing site of Amara West.