This year’s goal for the resumed work in the large New Kingdom cemetery SAC 5 was of course the identification of more tomb monuments – yesterday the first outlines of a shaft in our area 2 came to light, today we managed to clean the surroundings and to verify that we have found a previously unknown tomb! 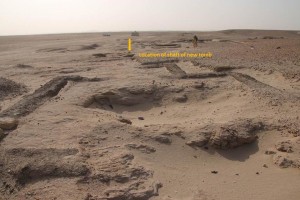 Location of new tomb 26 (looking from pyramid tomb 6 towards the west).

The new structure, christened as tomb 26 of SAC 5, of which we found very faint traces of mud bricks and the shaft, is located between tombs 8 and 7 in the area dug by the French Mission (see Minault-Gout/Thill 2012). In this southeastern part of the cemetery, already 13 New Kingdom tombs have been excavated – and more are probably still to be discovered!

For now, it is still unclear whether we will be able to reconstruct the superstructure of the new tomb – similar to the neighbouring tombs 2, 3, 4 and 5, the shaft is the main feature preserved. With reference to the named tombs, I do expect a rather short shaft of maybe 4-5 meters depth and only one burial chamber. 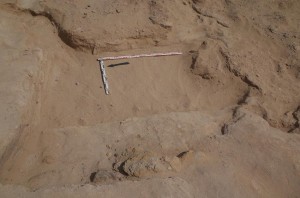 Upper part of the shaft of newly discovered tomb 26.

The material we found so far in the sandy filling covers the mid to late 18th Dynasty, the Late New Kingdom and the 25th Dynasty/Napatan Period. It will be exciting to explore the different phases of use of tomb 26 further – and of course we do hope for some glue about the original owner of this burial place in ancient Sai.