Sai Island in Northern Sudan has been continuously settled from Prehistory to modern times being occupied by various people throughout the ages. It is well known that the New Kingdom monuments, both the town site and the cemeteries, were reused in periods after the Pharaonic era. We found plenty of evidence during our excavations at SAV1 West and SAV1 East this year – one very nice piece is the adorable giraffe graffito.

For the cemetery SAC5, a re-use of 18th Dynasty tombs in the Late New Kingdom and in the Prenapatan and Napatan Period is well attested thanks to the excavations of the French mission (see Thill 2006-2007). This period, roughly the late 11th century up to the 8th century BCE, is still little understood in Northern Sudan (as it is the case for Egypt) – current excavations, especially at Tombos and Amara West, illustrate that much remains to be discovered from this era.

Today, we started the surface cleaning in a new area in cemetery SAC5. Thanks to the arrival of Florence Thill, who joined us for the upcoming weeks as external expert, we agreed to investigate an as-yet unexplored zone between the already excavated tombs. 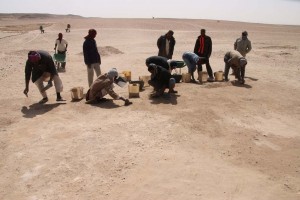 We are currently focusing on the southeastern surroundings of tomb 8. This 18th Dynasty tomb was also used as burial place in the Napatan period – therefore it came as no surprise that the ceramics we collected today from the surface cover a large time span: mid-late 18th Dynasty, Late Ramesside, Pre-Napatan, Napatan and Christian period! Most of the material dates to the 10th-8th centuries BCE – very exciting! 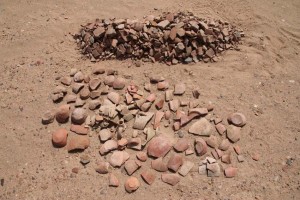 The sorting of the pottery fragments is undertaken at the site – wares and forms are counted, diagnostic pieces selected for further analysis. 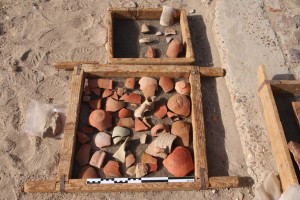 Thanks to our amazing washing man, the diagnostics found this morning were already clean after lunch: nice painted pilgrim flasks, amphorae (including 2 oases ones!) and especially Napatan cups and beakers.

The next days of work will hopefully tell us whether there are more reused 18th Dynasty tombs in this sector of SAC5, or even a Post-New Kingdom burial place. The first finds are very promising in many respects!