Week 9 of the 2016 season has just ended – work is progressing well in the cemetery (both in tomb 26 and in the area around the shaft) and in the magazine.

The burial chamber of tomb 26 has produced a lot of really nice objects by now – our fourth scarab of 2016 came up this week! It is still inside the chamber, left in situ as found next to the upper leg of one particularly well preserved individual in the southwestern corner. It is made of faience and bears a royal cartouche (finally :-))! Although already readable, we’ll share this news with you on the blog once the scarab is taken out and registered! 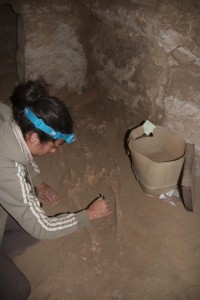 Marlies cleaning the area of the skeleton where the scarab was found.

One of the other highlights of this week was a very nice, intact stone pilgrim flask. It was discovered close to the upper body area of one of the individuals in the northwestern corner. 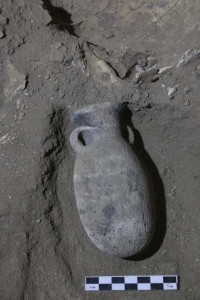 Marlies Wohlschlager and Andrea Stadlmayr were busy cleaning, documenting and removing several skeletons this week – among them a minimum of two infants – lots of interesting material which will tell us more about the complex history of use of tomb 26.

The area around the shaft of tomb 26 was cleaned by the gang of workmen headed by Hassan Dawd and supervised by Vanessa Becker, Cajetan Geiger and Huda Magzoub. A number of interesting finds were made – first of all a beautiful heart scarab and the lower part of a clay shabti – all hinting to the presence of a near-by shaft; however, until now, the cleaned area is void of tombs. 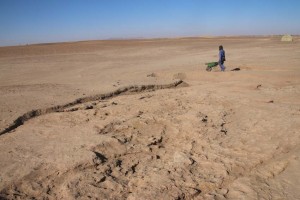 Work in the magazine is progressing as well – ceramics are washed and reconstructed, then documented by detailed drawings and the registration of objects continues as is photography. Reorganizing boxes, shelves and storage-space is another important task keeping us busy.

The significant mud brick remains within the test trench in SAV1 Northeast were drawn earlier this week by Michaela Janker and Bartlin Schöpflin. During very happy nimiti-days we all have to endure… 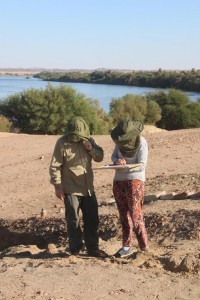 Fingers crossed that today’s wind will last for a some days and help to make the upcoming, final week of AcrossBorders season on Sai as productive and nimiti-free as possible!