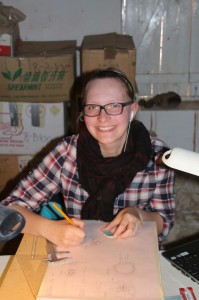 Object registration for the AcrossBorders Project is performed by Meg Gundlach and Ken Griffin, who return to Sai Island for their second season. Meg Gundlach is a post-doctoral researcher for the AcrossBorders Project while Ken Griffin, a Lecturer in Egyptology at Swansea University, is here as an external expert. This blog post is an account of their daily activities on Sai.

Our day starts with a 6.30am alarm. The last few mornings on Sai have been rather chilly so it’s out of bed and dressed as quickly as possible! Work officially starts at 7.00am, but beforehand we have a small breakfast and a drink, then make our way to the storage magazine. The first task of the day is to register objects that have been left for us by Julia. These are usually objects found during pottery sorting from the previous afternoon, such as re-used pot sherds (lids, scrapers, tokens, gaming pieces, and sometimes figurines). One of the highlights for us this season was a beautifully painted figurine of a horse (SAV1E 2675), dating to the Christian era, of which only the head survives (fig. 1). 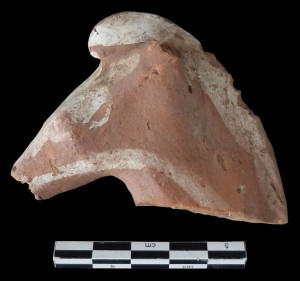 Objects are registered in a FileMaker database, which now consists of an impressive 4300 objects. The most common type of object is stone tools, which make up over half the database: pounders, hammers, grindstones, handmills, and whetstones.

Around 8.30am we relocate from the magazine to the office, in order to spend the next two hours undertaking photography. The objects that have been registered in the past 24 hours are photographed first. This season we have also been photographing objects from the 2013 and 2014 excavation season that were not previously done. Today we had two boxes of whetstones, which are perhaps the most frustrating objects to photograph because they are usually friable sandstone, thus continuously leaving grains of sand on the backdrop.

Our main breakfast takes place between 10.30–11.00am, following which we return to the magazine to continue our work. The next two hours are spent sorting photographs. Photos from today (usually around 350 images) are renamed, rotated, cropped, and straightened by Ken. Next, a set of low-resolution thumbnails are produced for each image, which can be inserted into the FileMaker database without making the file-size too large. The images are sorted into folders by Meg, who also inserts the thumbnails into the database and clickable links to high-resolution images of the objects. With our photo duties complete, we undertake any number of tasks outstanding before lunch at 3.00pm. This often includes more object registration, washing of some re-used sherds, and inventorying boxes of objects.

Our lunch break finishes at 4.00pm and it’s back to the magazine for the final two hours of work. With the excavation work completed for the day, we are greeted by new finds! Meg sorts and records the non-registered material, such as bones (both human and animal), charcoal, organic material, shell, and wood. Ken, on the other hand, starts registering of the other objects into the database. This season we had a number of nice objects to register, including a finely produced faience earring (SAV1E 2729), of which only half survives (fig. 2). 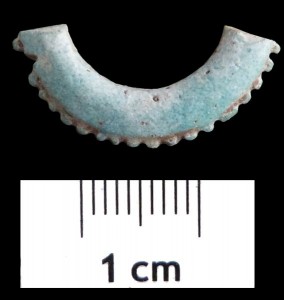 We have had several new fragments of New Kingdom Nun-bowls, which were studied last season by Sabine Tschorn, including one that preserves part of the pool in the centre (SAV1W 1544 fig. 3).

Most recently, a model boat (SAV1W 1574) was discovered in the Western part of the town (fig. 4). Crudely modelled in clay, the boat was painted white, and closely resembles the papyrus skiffs commonly depicted in Egyptian tomb paintings. 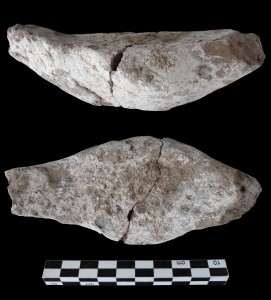 Over the past week we have been joined in the magazine by our Sudanese inspector, Huda Magzoub, who has volunteered to Munsell the stone tools. For this, we are extremely grateful (fig. 5)! 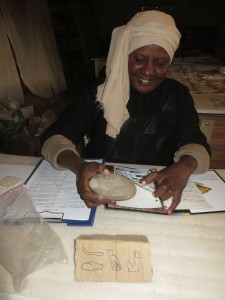 With work finished, it’s time for a shower and some rest before dinner is served at 8.00pm. Now for some sleep to recharge the batteries for the following day’s work!

Time flies by – only some months ago, we were working in the magazine of Sai Island documenting the different groups of objects. Sabine Tschorn had the special task to focus on faience vessels form the New Kingdom town. Most of the vessels within this group represent Nun- or marsh-bowls, frequently depicting marsh scenes with fishes, lotus plants and other motifs.

Sabine just came for a few days to Munich – in order to discuss things, to finalise small details of the drawings and records. We are in particular focusing on the distribution of the faience vessels – most of them were found in SAV1 North and SAV1 West and seem to be of late 18th Dynasty date. Adding the stratigraphical information and context as well as the data from the associated pottery will hopefully allow Sabine the fine-dating of some of the fragments. 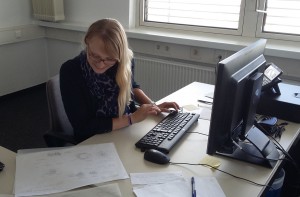 Looking much forward to the outcome of these days of checking and adding post-excavation data!

The end of week 3 of our excavations in the Pharaonic town of Sai Island, Upper Nubia, is approaching and our File Maker database is increasing day-to-day! It comprises all objects excavated in 2014 so far – a total of 946 finds have been registered from SAV1 East and SAV1 West, more than 600 are new objects found this year! These are mostly stone tools, grinding stone fragments, re-used sherds but also some faience beads, faience bowls and clay objects. The dating of the finds ranges from Pharaonic to Ottoman times – the latter is e.g. nicely illustrated by Islamic glazed ware. 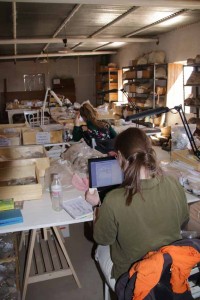 The database gives some basic information, a short description and all measurements of the individual finds. Julia and Nicole are doing a great job registrating the objects –  keeping up to date with the great number of finds arriving from the field on a daily basis is not an easy task – especially as we have 5 trenches open in two different areas!

Today’s highlight was a joining piece to a fragment of a Nun bowl (also known under the name of “marsh bowls” as they depict marsh scenes, floral and faunal motifs) found earlier in January at SAV1West – another small fragment, directly joining the first piece, was now discovered in the same area of Square 1, within a  very large assemblage of mid nice 18th Dynasty pottery, just east of the town enclosure wall. I am still hoping that more of this delicate dish will be unearthed this season! Its association with nicely decorated Thutmoside pottery of high quality is very interesting. 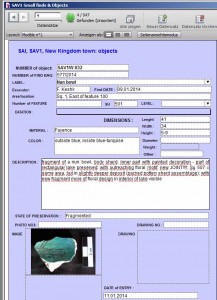