As with any archaeological excavation, object registration has an important role to play at Sai. Since arriving last week, over 300 finds have been registered, photographed, and entered into the FileMaker database, which now comprises 2060 entries. This year the database has been amended slightly in order to include some additional data and to provide links to each photograph, a feature which enables the thumbnails to be increased in size at the click of a button!  The objects range in size—from large quartzite grindstones to small faience beads—and in date—from the Palaeolithic Period to Ottoman times. The most abundant genre of objects needing to be registered is stone tool: grindstones, hand mills, hammers, pounders, and whetstones.

Some of the highlights registered this season include a pottery camel, a pottery quadruped, a fragment of a female figurine, and a flint sickle blade, all of which come from SAV1 West. 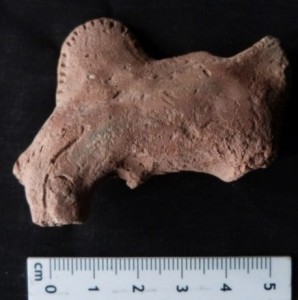 The pottery camel (SAV1W 800), likely dating to the Christian/Medieval era, is missing its head and front legs. The rest of the figure is well preserved, including the hump, and it is even possible to identify it as a male camel! Faint traces show that a red wash had been applied to the surface.

The small quadruped figurine (SAV1W 910) is also missing its head, thus making any identification uncertain. The feet are also damaged, as is the tail. Traces of a yellow pigment are still present on the figure. Could it be a dog, cow, or even a horse?

SAV1W 906 is a fragment which originally formed part of a female figurine. Despite its small size, the pubic triangle is clearly visible while the buttock is well also defined. The left hand is still visible on the hip. The figure is unfortunately broken at the waist, right knee and left thigh. However, this particular form is well known, particularly during the Eighteenth Dynasty.

Finally, SAV1W 909 is a well-shaped flint blade with the serrated edges well preserved. While flint tools are well known from the Predynastic Period in Egypt, it is known that sickle blades, for example, continued to be used through until the Roman Period. In fact, the lack of weathering on this artefact suggests that it may date to the New Kingdom. 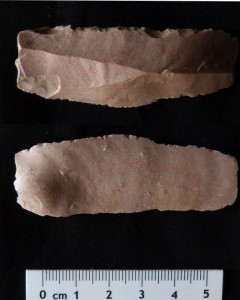 For only the first week of excavating, the finds have been quite exciting and prolific. We look forward to the rest of the season and sharing more highlights here on the blog!