Week 4 of fieldwork in SAV1 West and SAV1 East was very busy and fruitful – in both areas we have by now exposed in situ-remains dating from Dynasty 18, the main occupation phase of the New Kingdom site.

At SAV1 West, work in Square 1S, partly excavated in 2015, was continued – and feature 123 along the southern baulk of the trench is getting more and more exciting. We have not yet cleaned its foundation level, but have reached clear occupational deposits of high interest. 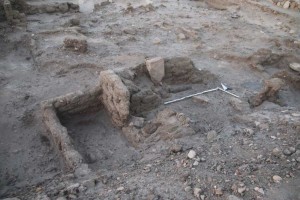 Work was also continued in the “wall street” – exposing more layers which will hopefully be of excitement for our micromorphologists arriving next week!

At SAV1 East, a very nice area for bread making (on a flat baking plate) was discovered – the baking plate was cut and partly hacked away like all the surrounding structures and layers. BUT: below the plate there are still 20 cm of occupational deposit – very exciting and again a task for Sean Taylor and Sayantani Neogi!

With two walls in Square 4B going into the northern baulk, we were forced to extent our excavation area: Square 4B1 covers 3 extra meters to the north and to the west. 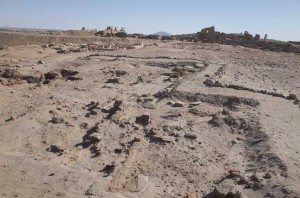 And here we really found the extension of the walls. Most importantly, my assumption that we had remains of a collapsed schist pavement in the northwestern corner of Square 4B was proven to be correct: yesterday just before noon, I cleaned the scarce but definitely solid and in situ remains of a very nice schist pavement! It was not easy to find, as it is was literally covered by mud brick debris and is cut off from all four sides! 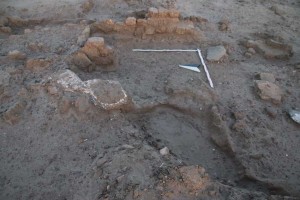 View on scarce remains of what used to be a schist pavement – cut off on all edges in medieval time.

All in all, with this last puzzle piece, it is now completely clear that our large rooms/magazine areas equipped with the sophisticated schist pavement extended to the west – of much importance for understanding the town plan of Sai.

In terms of pottery, I already shared some excitement about very nice findings from SAV1 West. At SAV1 East, it is less spectacular, but very interesting: still, mostly bread and beer! And all pottery associated so far with the walls and pavements are clearly mid-18th Dynasty in date, most probably Thutmose III.  Our 2016 results therefore nicely back up the work of years 2013-2015.

Since Ken Griffin is back to teaching at Swansea, Meg Gundlach is carrying on with the registration of finds on her own at the moment – assisted by Huda Magzoub for some Munselling, and more assistants will arrive in mid-February. There were a number of really exciting finds this week – animal figurines, female figurines and most importantly the first seal impression of this season from SAV1 East!

After 4 four weeks of excavation, I am very happy with the progress so far and looking much forward to the results of the upcoming week…

Week 3 of fieldwork in sectors SAV1 East and West of the New Kingdom town of Sai has just ended. There were several highlights this week – first of all a scarab from the floor of a small, not yet completely excavated room in SAV1 East. Of course this find came up just after our registrars Meg and Ken finished a blog post about their activities! We’ll share this highlight in another post very soon.

Very good news from SAV1 East: more remains of mud brick walls in situ were unearthed – in combination with lots of schist plates and plaster: evidence of destroyed pavements. 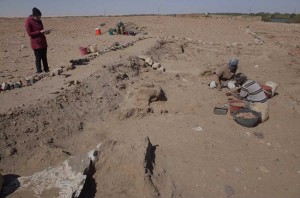 Pottery and stone tools were especially numerous from SAV1 West – more blue painted sherds were found, a number of fire dogs including a very unusual one without a “nose”, and lots of beer jars, dishes/plates and pot stands. The stone tools included very nice palettes, grinders and small dishes with yellow and red pigments. They seem to fall into the category of Egyptian type cosmetic instruments well attested at New Kingdom sites. Together with some painter’s pots this all fits very well to last year’s results and attests to some sort of production and use of pigments during the 18th Dynasty.

At SAV1 East, the upcoming week will focus on the clearance of the already visible 18th Dynasty buildings. At SAV1 West, strong layers of debris still need to be removed and are hopefully hiding some in situ-remains of the New Kingdom. 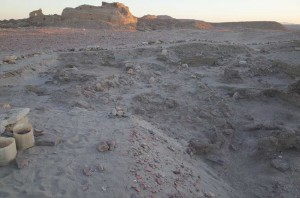