The final leg of the journey to Sai Island was by boat under a starry sky, along with hauling luggage in and out of the boat. Fortunately, we had help with the luggage. After a whistle-stop tour of the dig house by Director of the AcrossBorders project, Prof. Julia Budka, we found our rooms and I anxiously checked the archaeological supplies I had brought with me. All was safe and sound, if a little dusty.

As a micromorphologist who specializes in inhabited space, I joined the AcrossBorders team during the 2015 field season with the defined aim of providing a preliminary assessment of the nature of sedimentary depositional sequences within the New Kingdom town. One of the objectives is to detect and characterize traces of space use as indicators of social behaviour. The approach taken for the investigation of daily life activity is a micromorphological analysis of the formation processes of floors in buildings and street surfaces (Boivin 2000; Matthews et al. 1997). These are areas that are a rich source of data for a micromorphologist as the debris of everyday life, for example, hearth rake out informally discarded in a street or, spilled grain accidentally trampled into a floor, leaves tell-tale imprints that are captured in soil blocks.

During the 2015 field season, excavation in SAV1 West exposed a range of contexts for sampling in the street that bounds the town wall. Despite ancient digging during the Medieval and Ottoman periods for mud brick, undisturbed deposits were identified and a series of samples taken. As streets can be more than traffic routes, the objective is to investigate what other activities could have taken place in these areas. One sequence of intact cultural deposits in the thoroughfare was uncovered in the southern part of Square 1. As the deposits seal firmly against a wall on the eastern side of the street, this suggests that the deposits and the wall are contemporary. Visual examination of the depositional sequence indicated a series of thin, compacted silt and sand sediments sandwiched between thicker, looser sediment with occasional pockets of ashy material. These deposits were partially cut by a pit but the sequence, Profile 14, was captured with the assistance of Stefanie Juch. 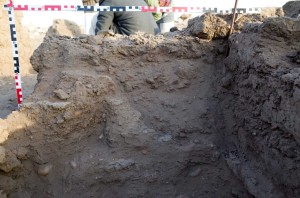 In contrast to the street deposits in SAV1 West, a sequence of thin, fine silty deposits were exposed in the southeastern corner of Square 1. The deposits seal against two intersecting walls suggesting that the context is a building interior (feature 116). The objective is similar to that of the street to investigate how this space was being used. Visual examination indicated fine, laminar sediments consisting of dense, compacted silt and ash with inclusions of charcoal, overlain by a thicker compacted deposit of fine, silty sediment. Again with the assistance of Stefanie Juch, samples were taken from this depositional sequence, Profile 18. 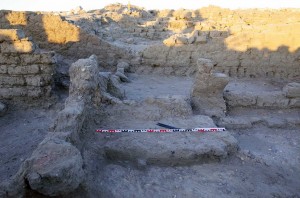 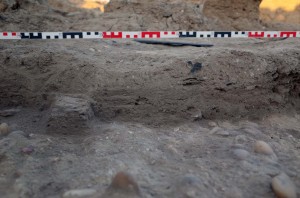 Profiles 14 and 18 are but two of the eighteen profiles taken in the New Kingdom town during the 2015 AcrossBorders field season and present a snap shot of the variation in cultural deposits that have been sampled. The visual examination of these deposits suggest a range of intriguing possibilities such as burning, cooking and, or dumping. However, it is only with a full analysis of the samples that the depositional formation processes can be assessed in order to answer questions about use of space and social conventions in the town.

Micromorphological sampling takes time and patience and with enthusiastic support of Director, Prof. Julia Budka and the team the whole process was a highly rewarding and successful experience.