Work is progressing well in SAV1 West – occupational deposits and new sections of walls with several phases of use datable to the mid and late 18th Dynasty have been exposed in the last days. The ceramics are very exciting – a large percentage of Egyptian marl clay wares, considerable amounts of painted wares and a very good state of preservation.

One context was especially interesting and I would like to share first impressions, hoping for some feedback at this early stage of processing. The stratigraphic unit in question comprises the last level of debris covering a small mudbrick structure in the south-eastern corner of Square 1SE. Because of its preservation, it is very likely that the pottery represents the original inventory that was shifted/mixed when the late antique pitting in the area occurred, cutting down to the original layers.

154 diagnostic sherds attest to a late 18th Dynasty date. 12 % of these diagnostics were Nubian cooking pots with clear traces of use (their surface is smoked and soothed) – mostly with basketry impression and one single piece with incised decoration. Except that this is quite a high amount of Nubian pottery, all is consistent with the findings in SAV1 West so far. Most of the Nubian cooking ware in the New Kingdom town of Sai features basketry patterns, whereas coarse incised patterns with diagonally cut lines below the rim (very common at Elephantine and mostly associated with the Pangrave culture) is less common. 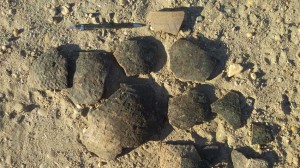 Snapshot from the field: the pencil marks the unique sherd in question; below are some of the Nubian sherds.

What makes the context in Square 1SE special is one rim sherd: An Egyptian Nile clay cooking pot occurs side by side with the Nubian ones – basically, something which is not unusual, but already well attested at SAV1 West. Imported, authentic Egyptian wheel-made cooking pots and locally made examples thrown on the wheel are used side by side with Nubian-style products in New Kingdom Sai and were found in all sectors in the Pharaonic town (SAV1 North, SAV1 East and SAV1 West).

But: this authentic Egyptian cooking pot (produced in and imported from Egypt) is not smoked (so maybe was not yet used?), but displays a very unusual feature. Below its rim, there are several diagonally arranged black lines – definitely painted/drawn. With these strokes, the Egyptian cooking pot resembles Nubian style variants with incised decoration. So-called hybrid styles – Nubian surface treatments on otherwise Egyptian pottery vessels – are well attested at Sai, other Nubian sites and also Elephantine. But is this also the case with the unique piece in question? Did the “artist” of these black lines wanted to show that something is missing on this pot? Was it a spontaneous idea of someone familiar with the incised cooking ware? Or are these lines really to be interpreted as decoration, to fuse Nubian cooking tradition with the Egyptian style? Since the authentic Egyptian cooking pots are made and fired in Egypt, it was of course not possible to apply pre-firing incised decoration on them like on the Nubian ones and the hybrid forms at Elephantine. On the other hand, we have a number of locally produced Egyptian style cooking pots on Sai – and none of them shows incised decoration…

Much food for thought and a lot of open questions – but at the end of a long working day with much routine work and processing, findings like these are inspiring and give fresh ideas and much energy!