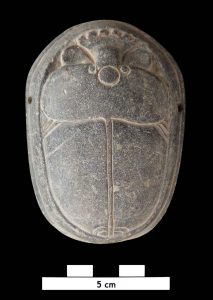 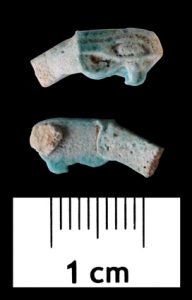 SAV1E 851 initially presents itself as a somewhat challenging figurine. Rather crudely shaped out of clay, the shape is elongated with one rounded and one broken end. With a little imagination it is possible to visualize this object as the rear end of an animal.  This creature must certainly be recumbent as the smooth preserved bottom precludes the attachment of legs. Unfortunately, the surface of the area where a potential tail may attach is damaged. Though the shape is vague, the prominently incised decoration is quite remarkable. Two lines of incised dots run across the back (one forming the edge of break), a common design of body adornment on the rudimentary style of clay female figurines which are frequently found within the New Kingdom settlement of Sai.

In addition to the dotted lines, the left flank bears a lotus petal and the right a butterfly, motifs typically found on the well-known faience hippos of the Middle Kingdom. The combination of the shape and the distinctive decoration means that this (previously) unremarkable lump of clay must be a hippo!

As the largest indigenous animal in Egypt, the hippopotamus was memorialized in art from the Predynastic Period onwards. Commonly associated with the protective qualities of the goddess Taweret or the chaotic forces of Seth, the hippo motif finds a home in both the private and public spheres. As such, representations may include either the composite form of the deity or the animal itself. Zoomorphic figurines are known in a range of materials and like SAV1E, clay hippos are attested also in the New Kingdom settlements of Amarna and Lisht.

On Monday (09 May 16) the annual colloquium of the Sudan Archaeological Research Society (SARS) was held in the British Museum. Though AcrossBorders was not presenting this year, Martin Fera and I attended to hear about the fascinating work our colleagues are doing all over Sudan. The connections and comparisons between multiple sites along the Nile is a guiding principal of the AcrossBorders’ approach, and the chance to better understand our neighboring sites is invaluable to our own work.

So, though an exciting day was expected, we immediately got more than we bargained for as the opening of the museum grounds was delayed by an unexpected “guest speaker”—the British Prime Minister David Cameron was holding a press conference in the Great Hall! After a brief delay, the colloquium began and a full day of talks whirled by. Though their discoveries are not mine to share, the excavation, restoration, and lab work currently being carried out in Sudan is truly impressive.