Our readers must be thinking why ‘lab-orious’? Well, our geoarchaeological samples are grabbing all my attention during this time of the summer. As a result, quite willingly, a lot of laborious time is being spent in the ‘lab’. Obviously, the reason behind this is an underlying eagerness towards analysing the end products, i.e., the thin sections as soon as possible!

After having travelled quite a few thousand kilometers from Sai Island, all the samples had arrived at the McBurney Laboratory of Geoarchaeology, University of Cambridge in perfect condition in June 2015. Thereafter, laboratory procedures had begun which include thin section manufacturing followed by microscopic analysis, geochemical analyses of loose soil/sediments and finally integration of these several strands of data for interpretation.

The process of manufacturing the thin sections is being undertaken following the method described by Murphy (Murphy 1986; Goldberg and Macphail 2006). The soil/sediment blocks were first removed from the cling film, air dried on a shelf for one to two weeks, before being dried in an oven for two days (48 hours) at 40°C. This was followed by impregnation with a mixture of crystallitic polymer resin (1700ml), acetone (200ml) and catalyst (methyl ethyl ketone peroxide or MEKP) (0.5ml). The samples were then left under a vacuum-pumping machine for 24 hours so as to allow infiltration of the resin into the soil pore space.

These impregnated blocks have now been left for curing in a fume cupboard (at least for two-three months) for complete hardening. When fully consolidated, they will be converted into thin sections.

Stay tuned for more updates on last stage of thin section manufacturing and obviously for the updates on analysis. 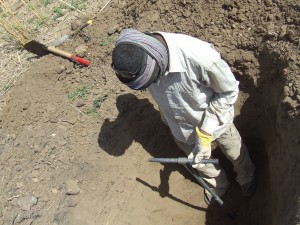 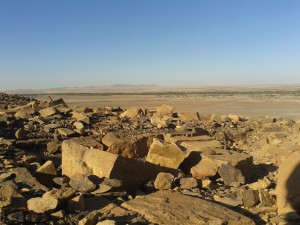