Thanks to the great help and support by our Sudanese colleagues, everything was arranged in the last days here in Khartoum and a set of samples is waiting to be exported; Martin and me are flying out early tomorrow morning – as the last team members of AcrossBorders’ 2015 field season.

Looking back, it’s a challenge to summarize these ten weeks in the field on Sai Island. The 2015 field season resulted in various important insights and added valuable information about the evolution of the Pharaonic town of Sai Island and its development from the early 18th Dynasty to the Ramesside era. The four most important results can be briefly summarized as follows:

(1)     The features unearthed in the southern part of SAV1 East pre-date “Building A” and probably belong to the early 18th Dynasty. With feature 57, a terrace wall set against the natural gravel deposit, affinities to the building technique of the Kerma culture – dry-stone walls with galus/earth– can be noted. All in all, these southern remains mirror our findings in 2013 and can be interpreted as the northern extensions of the area excavated by Michel Azim around temple A. A dating to the very early New Kingdom (Ahmose? Amenhotep I?) is most likely. 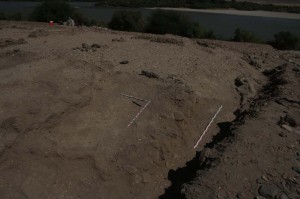 Early 18th Dynasty remains along the southern edge of SAV1 East; including the terracing wall feature 57.

(2)     “Building A” at SAV1 East provides a close parallel to the so-called residence SAF2 in the southern part of the Pharaonic town, probably also regarding its function. For the first time, large sets of seal impressions were discovered in the Pharaonic town of Sai, allowing reconstructing patterns of the Egyptian administration in Upper Nubia. The recent finds illustrate very well the importance of Sai as administrative centre during the time of Thutmose III, but probably already during the reign of Hatshepsut.

(3)     The earliest phase of occupation within the town enclosure at SAV1 West is contemporaneous to the building of the town wall and dates to the mid-18th Dynasty. There is clear negative evidence for an early 18th Dynasty presence at the site. It has to be highlighted that we also have hints for Ramesside activities at SAV1 West. 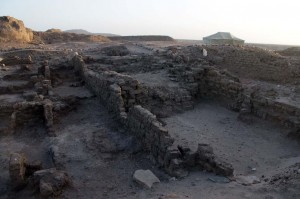 Nothing predating the town enclosure was found in SAV1 West – the earliest exposed structures are contemporaneous to the town wall.

(4)     More New Kingdom tombs are still unexcavated in the southern part of the major pyramid cemetery SAC5 – this is clearly illustrated by tomb 26. The findings in tomb 26 testify that there were burials during the 19th Dynasty – of high officials like the jdnw of Kush Hornakht. This is of great importance for understanding the relationship between Sai and Amara West in this era and might be of historical significance for Upper Nubia in a broader sense. 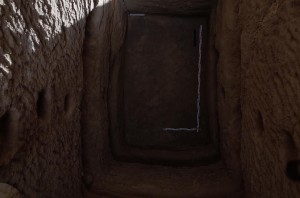 The shaft of tomb 26 yielded a lot of interesting finds attesting to a multiple use!

Once again I would like to thank everybody who contributed to this very successful 2015 season – all international team members, all colleagues from NCAM and especially our inspector Huda Magzoub who did a fantastic job as usual, all of the house staff (Sidahmed, Abdelfatah, Osama, Moatez and Ahmed), the field staff and of course the local communities on Sai. Looking much forward to the post-excavation processing of this rich set of data, samples and finds and of course to the next season 2016! 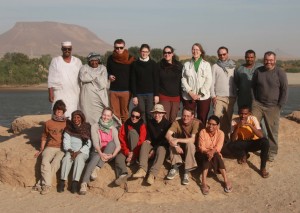 The success of the 2015 season was only possibly with great team work!

2 thoughts on “AcrossBorders 2015: looking back at a fruitful season”