A small sneak preview of my upcoming London paper: based on results from recent fieldwork, I will summarize our present understanding of the diachronic development of the New Kingdom town at Sai Island, and I will also briefly speak about the possible cohabitation of Egyptians and Nubians.

The earliest level at area SAV1 East within the New Kingdom town corresponds to the domestic remains and structures excavated by M. Azim in the 1970s around Temple A (SAV1, Azim 2011-2012). Azim was able to show that these occupation remains are earlier than the stone temple and thus Pre-Thutmose III in date – based on parallels from the site of Gism el-Arab and observations on Nubian ceramics found in the surroundings of Temple A, an interpretation of SAV1 as Kerma classique habitation site was tentatively suggested (Azim 2011-2012: 36-37).

As reported, feature 14 and other remains in the southern part of SAV1E allowed us to link our new excavation site with the domestic zone around Temple A. Interestingly, within the storage bin (feature 14) and in its surroundings there have been several fragments of Kerma vessels in the local Nubian tradition. A Nubian presence is therefore traceable at SAV1 East, mostly represented by cooking pots, but also fine wares and a storage vessel have been found. This compares well to material documented at SAV1 North and to what Azim mentioned for the zone around Temple A. Parallels can be also named  from other Upper Nubian sites like e.g. Sesebi (see Rose 2012). 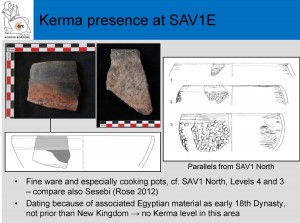 Thanks to the associated Egyptian material at SAV1 East, we are able to date the Kerma material as early 18th Dynasty, pre-Thutmose III, but not pre-New Kingdom. Characterized by small structures with single-brick walls and storage facilities, the area at the eastern edge of the site can be safely interpreted as part of the newly founded Egyptian town without an earlier Kerma habitation below.