Among other aspects of daily life activities, AcrossBorders aims at studying in detail the craft specialisation of functional ceramics associated with cooking and baking and various aspects of food preparation. Here, the co-existence of Egyptian style (wheel-made) and Nubian (hand-made) cooking pots as well as the import of real Egyptian cooking pots are of particular interest. Today, a large fragment of a cooking pot produced in Egypt was documented at SAV1East in Square 4B – obviously in situ, set into an ashy deposit next to a wall and still filled with some ashy material and charcoal.

Another really interesting in situ situation with a functional ceramic type was found in Square 4C: a large baking plate is still in place – close to a mud brick wall, sitting on a very ashy deposit. 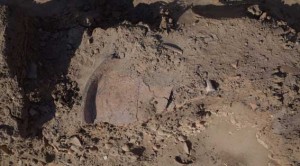 Luckily a good portion of this 18th Dynasty baking plate was left in place despite the pitting of the area in Medieval/Ottoman times.

Until now, we only had small fragments of these plates from SAV1 East and otherwise hundreds of conical bread moulds (probably associated with the nearby Temple A). The new baking plate and its find context are therefore of particular interest – therefore we decided to take a micromorphological sample from the ashy deposit associated with this area (and nicely “sealed” by the baking plate on top) which might have functioned as temporary “kitchen”. 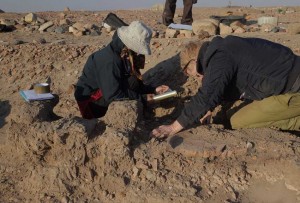 Quite a challenge, but managed without problems: samples taken at SAV1 East.

These new data from SAV1 East – ceramics, archaeological context and micromorphology – will contribute to a better understanding of  some aspect of food preparation within the New Kingdom town of Sai.

Back again in Munich ‒ after three dense and highly inspiring days fully dedicated to the archaeometric study of pottery and ceramic materials at the 13th European Meeting on Ancient Ceramics (EMAC) held in the Acropolis Museum in Athens from Sep. 24-26.
Fall has definitively arrived and the EMAC meeting successfully closed a very fruitful conference summer season, started in June with the AcrossBorders workshop “Settlements patterns in Egypt and Nubia” at the Egyptian State Museum in Munich ̶ and continued over the summer with the International Congress of Egyptology (ICE) in Florence and the International Congress for Young Egyptologists (ICYE) in Vienna.
Since I am not an Egyptologist and unfortunately not even so young anymore, I happily represented, as the archaeometric ceramic specialist in our team, the AcrossBorders project at the 13th EMAC in Athens with a poster co-authored by Julia Budka, Elena Garcea and Johannes Sterba. The title of our poster was: “Discrimination of Nile clay ceramic ware by geochemistry: three case studies from Sai Island (Northern Sudan)”. 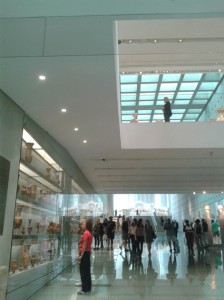 The entrance of the Acropolis Museum in Athens, venue of the EMAC 2015.

This was the third time I personally attended the European Meeting on Ancient Ceramics (EMAC) which has already a fairly long tradition. The first EMAC took place in Rome in 1991 with the aim of gathering together different scholars working on ceramics in the Mediterranean regions.
Over the last three decades, the European Meeting on Ancient Ceramics (EMAC) has become established as an important international forum in the field of ancient ceramics with a particular attention to the development of new scientific methodologies and laboratory techniques applied to the study of ceramic materials.
Nowadays, the geographical focus of the EMAC is not restricted anymore just to the Mediterranean regions, but the topics of the conference have been greatly extended and include also several different European and non-European countries.
Also the time frame of the conference topics is always very broad, ranging from the early pottery productions dated to Prehistory till more recent evidences and case studies from the Iron Age up to Roman, Medieval and post-Medieval times.
However, what represents to me the principal reason for interest in this conference is the exceptional condition of having gathered together in the same room so many specialists working on archaeometry and ceramics either with a background as archaeologists, or as hard scientists in the fields of petrography, mineralogy, chemistry and geology.

More than 200 abstracts were submitted in this last EMAC 2015 of which 197 were accepted and allocated either to poster or oral sessions.
The scientific committee did a great job in organizing both the poster and the talks by following a dual policy in the definitions of the sessions ̶ on one hand organized according to the main topics (i.e. methodology, raw materials, pyrotechnical ceramics, building materials etc.), and on the other hand according to chronological and geographical criteria. 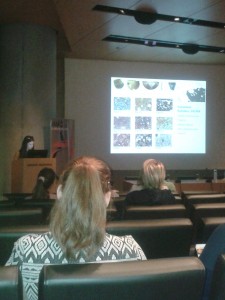 The auditorium hall in the Acropolis Museum.

For the session “Methodology”, two very useful talks regarded the application of the portable XRF- analyser to archaeological ceramics: what is the good, the bad and reality about (by A.M.W Hunt and R.J. Speakman) and which are the new prospects for the archaeological studies (by M. Daszkiewicz et al.). Highly interesting was also the talk given by some colleagues from Vienna (A. Kern, T. Ntaflos and D. Arnitz) about the “Experimental verification of calcite dependent temperature determination”. Material of AcrossBorders from Sai Island was mentioned in the co-authored paper by I. Hein et al. on “Patron recognition with Gabor filter and K-nearest neighbor algorithm applied to archaeological ceramic materials.”

Several stimulating talks were also presented in the session “Early pottery production and mobility”, among them I want to point out the one by S. Amicone, P. Quinn et al. regarding the study of late Neolithic and early Calcolithic communities in the Balkans and the one given by M. Dikomitou-Eliadou, V. Kilikoglou et al. about the earliest cooking pots traditions in Cypro.

The poster session was simply spectacular both for the variety of topics, chronological and geographical contexts presented and for the beautiful sunny open-air setting in the garden of the British School at Athens. Moreover, a parallel virtual session provided a complementary platform for the poster presentations. 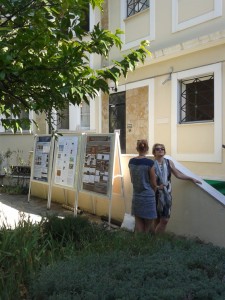 Open-air poster session at the British School in Athens.

I was pleasantly surprised to see how both Egypt and Sudan were very well represented in several posters and through different ages.
Our poster (P-016) in the session “Raw material” presented three patterns of variability recognized in the composition of both raw clay material and tempers in Nile clay ceramics from Sai Island, by means of chemical (INAA) and petrographic (OM) analyses.
The results, organized in three distinct blocks, included 1) a diachronic analysis of the Nubian-style handmade wares from Prehistory till the New Kingdom age, 2) a comparison between the Nubian-style and the Egyptian-style New Kingdom ceramics and 3) a comparison between the Egyptian-style and the Real Egyptian imported New Kingdom wares.

Coffee breaks and lunches, of course based on local delicious Greek specialities, offered the opportunity for informal talks and meetings with new and old colleagues from different countries.
Finally, I took a bit of time for sightseeing and for discovering the city ̶ there is simply no chance to avoid archaeology in Athens: the whole city is plenty of wonderful archaeological buildings and museums you cannot escape. 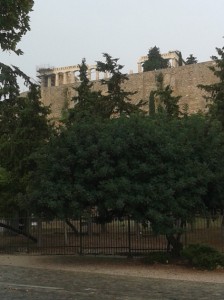