One of the characteristics of the so-called temple towns in Nubia is the presence of so-called governor’s palaces in the south-eastern corner of the walled area. These exceptional, palace-like houses are situated in the vicinity of the stone temples of the individual towns and most probably functioned as headquarter for the local ruler or highest official. In an article recently published, I presented some thoughts based on the evidence from Sai and the so-called palace SAF2, including AcrossBorders’ new results from sector SAV1 East (Budka 2018). 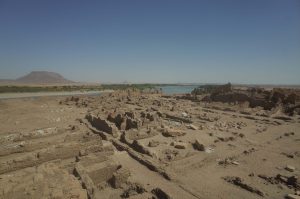 Overview of southern part of the New Kingdom town of Sai, with so-called palace in the background (southeastern corner of town).

I tried to argue that the close relationship of the “palace” and the stone temple for gods becomes very evident on Sai. Obviously, SAF2 was a representative building for the local administration and offi cials like the mayor and the jdnw of Kush. Small details like the non-axial access to the main columned hall and storage installations indicate that in addition to its evocative character as an “Egyptian” building, SAF2 was really used for domestic purposes.

Ingrid Adenstedt has worked on the ground plan and also the 3D reconstruction of SAF2  – she convincingly showed that the building most likely had two storeys (Adenstedt 2016). Her reconstruction was also used in the animations of our recently published short film about the AcrossBorders project. 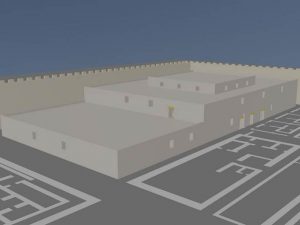 What also became evident by the reassessment of the so-called governor’s palaces within Egyptian temple towns in Nubia is the fact that despite of all their common characteristics (location within the town, two storeys, columned central hall etc.), a site specific approach considering the local topography as well as the functional aspects of the site (depending on its date of foundation, its specific situation, the local temples, the surrounding Nubian sites, the hinterland etc.) is essential for our understanding of these palatial buildings of the New Kingdom.

Adensted 2016 = I. Adenstedt, Reconstructing Pharaonic Architecture in Nubia: the case study of SAV1, Sai Island, Contributions to the Archaeology of Egypt, Nubia and the Levant 3, Vienna 2016. http://hw.oeaw.ac.at/7952-8inhalt?frames=yes.

Budka 2018 = J. Budka, Palaces in so-called Nubian temple towns: A reassessment, in: Manfred Bietak and Silvia Prell (eds.), Ancient Egyptian and Ancient Near Eastern Palaces. Volume I. Proceedings of the Conference on Palaces in Ancient Egypt, held in London 12th – 14th June 2013, Contributions to the Archaeology of Egypt, Nubia and the Levant 5, Vienna 2018, 251–273.