Ancient Egyptian houses have been quite colourful as we know from well preserved sites like Amarna (cf. e.g. Kemp 2012 with nice colour plates and illustrations) and Amara West – in addition to the common mud plaster coating the mud-brick walls, traces of whitewash and painted wall plaster is documented. Also remains of pigments have frequently been found in ancient settlement contexts, most often on some kind of painting palette in various materials.

A small group of 11 pottery vessels from SAV1 West falls into this category and gives first indications that also the houses in the New Kingdom town of Sai might have been partly painted and decorated: these vessels show all traces of pigments on their interior, mostly yellow, blue and some red. These are the most common colours within domestic contexts (as well as for decorating stone blocks of temple architecture). 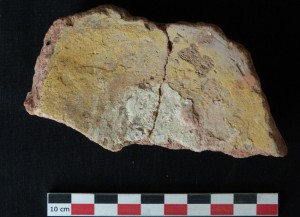 Interior of one of the painter’s pots from SAV1 West.

The painter’s pots from SAV1 West have all been found in Square 1, towards the east of the enclosure wall, presumably thus connected with structures from the interior of the town. Some grinding stones and hammer stones with traces of pigments have also been noted, as well as plaster remains and what seems to be gypsum. 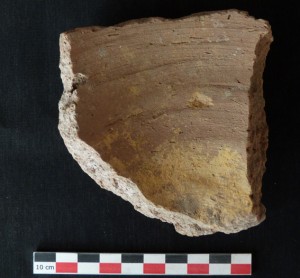 One of the “flower pots” from SAV1 West with yellow pigment inside.

Insha’allah we will be able to investigate the pigments, plaster and gypsum left on ceramic sherds and stone tools next year in more detail – possibly with exporting some samples with the permission of the National Corporation for Antiquities & Museums in Sudan for analyses here in Vienna. As yet, the painter’s pots from SAV1 West give small hints that the furnishings in people’s houses of Sai were maybe following similar standards like in Egypt, where light and colour had quite important functions (cf. Kemp 2012, 188-190).