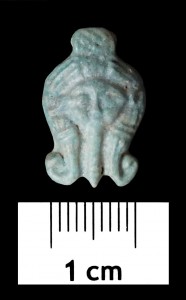 The 2016 cemetery season has produced a lot of great material that we want to share here on the blog, particularly our growing collection of scarabs. However, working with all the new finds has made me slightly nostalgic and I spent some time this week reacquainting myself with last season’s treasures. So many wonderful things forgotten!

A particular favorite of mine was this sweet little Hathor amulet (SAC5 085), intended to be strung through the extension at the top. As a protectress of nearly all aspects of life, including within the necropolis, Hathor was the perfect choice for personal adornment. Though our example is quite small and delicate, the detail in her hair and face is exceptional. Found in the burial shaft of Tomb 26, she was an early indication of the quality of finds to come and she has not disappointed us, this season or last!

Figurative vessels from Ancient Egypt (see Bourriau 1987) include feminoform vessels with modelled breasts and often plastic arms. Such jars are attested in a variety of forms (see especially Seiler 2006 for the distinction between “Hathor” and “Isis” vases) and derive primarily from tombs (cf., e.g., Lopez Grande/de Gregorio 2009). In recent years, feminoform vessels have also been recorded from domestic contexts at settlements like Elephantine, the town area of Abydos and also Sai Island (Budka forthc.).

Although more common in the New Kingdom, pottery vessels with applied breasts and feminine faces are already known from the Middle Kingdom onwards (Stevens 2006: 171 with literature). They have often been labelled as “milk vessels”; various authors associate them with the cult of Hathor (e.g. Bourriau 1982: 78; Hope 1982: 87; Smith 2003: 47). 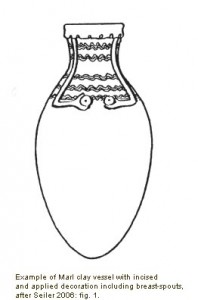 The prime feature which characterises the pottery vessels as feminoform vases are nipples or breasts applied to the upper part of the body of the jar. They are attested both as pierced ones, potentially functioning as small spouts, or as unpierced examples with a greater emphasis on anatomical details of the female breast. Feminine faces at the neck may complement these breast applications, but are sometimes missing. Applied arms including hands are present in some cases; sometimes they are executed in paint only.

At SAV1N, the excavation area in the north of the fortified New Kingdom town of Sai Island, two fragments of femino­form vases were found (see Budka forthc.). A surface find completes this small assemblage of three figure vases from 18th Dynasty Sai. The latter, a sherd collected by Francis Geus in 1998 from the surface, cannot be dated by context. It is a heavily worn shoulder fragment of a Marl A3 vessel. Modelled arms and hands are cupping the female breasts which are not pierced. There are no traces of wavy lines or incised comb patterns, as attested for an otherwise very similar jar from a tomb at Qustul (Bourriau 1982: 78, no. 50, Chicago 21044 from Qustul, tomb R. 29, early 18th Dynasty). 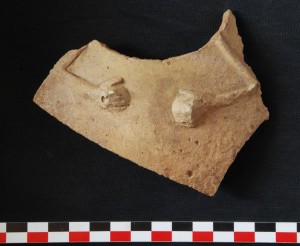 Fragment of feminoform vessel from Sai.

Although similar Marl A3 vessels are already known in the Middle Kingdom and the Second Intermediate Period, the comparison from Qustul and the archaeological context from Sai itself suggest a dating of the Marl A3 feminoform vessel to the early 18th Dynasty. It is significant (if tiny) evidence towards reconstructing Pharaonic lifestyle on Sai during the New Kingdom – which includes references to the general theme of regeneration and fertility as well as traces of “private religion” (cf. Stevens 2006).