The last weeks have been quite intense – time flies by and the end of the project is approaching while the teaching term here in Munich has again started. All of us are currently busy preparing tasks for the next publications of AcrossBorders. 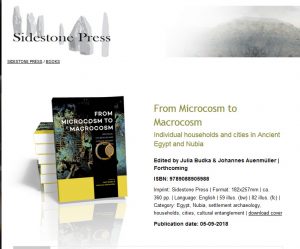 Johannes and me have submitted the manuscript of our conference proceedings to Sidestone Press – it will appear, as planned, in September 2018! And will provide new information about cities and households in Ancient Egypt and Nubia, of course with a special focus on AcrossBorders and its case studies Sai Island and Elephantine.

Veronica is currently preparing several things for the next monograph, to be published again in CAENL of OREA. This volume will be entitled “AcrossBorders 2: Living in New Kingdom Sai” and will comprise descriptions of the environmental conditions for the New Kingdom town of Sai Island as well as overviews of the excavations in SAV1 East and SAV1 West and the associated material remains. The book will also include results of AcrossBorders comparative approach looking at Abydos and Elephantine when assessing Sai as New Kingdom microcosm in ancient Nubia.

Last 3D models, sections and plans are getting prepared by Cajetan, while Daniela is busy with digitalizing drawings of objects from Sai Island, here in particular from SAV1 East.

I am very proud of my team because we’re so well in time, processing is much advanced and the assembly of all data will provide fresh results in the very near future.

It is my great pleasure to announce the conference “From Microcosm to Macrocosm: Individual households and cities in Ancient Egypt and Nubia”, to be held from 1–3 September, 2017 in Munich, hosted by Ludwig-Maximilians-University. Thanks to the kindness of the Egyptian Museum and my colleagues there, the venue of the conference is the lecture hall of the Museum. It is the closing event of the ERC project AcrossBorders and will highlight our recent fieldwork on New Kingdom Sai.

The AcrossBorders project has concentrated in the last five years on settlement patterns in Egypt and Upper Nubia in the 2nd Millennium BC: various interactions and mutual influences are attested for these regions which are situated across ancient (Pharaonic Egypt and Kingdom of Kush) and modern (Egypt and Sudan) borders with diverse environmental and cultural preconditions. Much progress has been made in Egyptian and Nubian settlement archaeology in recent years, but further research addressing general aspects of living conditions and the specific coexistence of Egyptians and Nubians is required. Of chief interest are the architecture and structure of the Egyptian towns established in Upper Nubia during the New Kingdom, their social stratification, the local relations of Nubians and Egyptians and the specific material culture.

The conference focuses therefore on 1) individual households of selected sites in Egypt and Nubia. In addition to this microapproach, introducing microhistories of individual sites according to recent fieldwork and archaeometric applications, the event also discusses 2) general patterns and regional developments –thus, the macrocosm of New Kingdom Nubia.

I am extremely delighted that so many colleagues have accepted our invitation – the program covers a large variety of case studies from Egypt and Nubia. Among others, we will welcome as our distinguished guests Abdelrahman Ali (Director General of NCAM), Manfred Bietak (Prof. em. Vienna and PI of the ERC Advanced Grant “The Hyksos Enigma”), Charles Bonnet (Director of the excavations at Kerma/Doukki Gel), Cornelius von Pilgrim (Director of the Swiss Institute Cairo) and Neal Spencer (Keeper of the Department Ancient Egypt and Sudan at the British Museum and Director of the Amara West excavations).

Looking very much forward to this closing event here in Munich!