The last week has been mainly devoted to registering site photos, object photos and working on the various databases, especially the ones dedicated to small finds and pottery.

As noted earlier, the appearance of fire dogs was very remarkable at the new site SAV1 West. At present 21 pieces have been registered in 2014, making up 10 % of the 209 diagnostics from Square 1 currently in the database. 8 “legs” or “ears” have been found, 12 fragments of the lower part and 1 “nose”, all of which show some traces of burning. 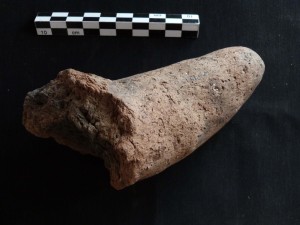 Example of a “leg” of a fire dog from SAV1 West. 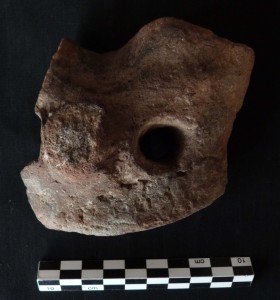 Fragment of the lower part of a fire dog from SAV1 West.

Most of the pieces come from the eastern half of the square, especially from the substantial layer of debris covering the New Kingdom mud brick structures. It remains to be investigated whether we can associate the fire dogs with the use-life of these remains. All in all, SAV1 West seems to mirror the situation at SAV1 North – after five years of excavation 126 fire dogs have been unearthed in this northern area of the Pharaonic town. In contrast, only 5 fragments of fire dogs have been found in two seasons (2013 and 2014) at SAV1 East.

In total, the corpus of fire dogs from the New Kingdom town of Sai comprises with the new finds from 2014 more than 150 pieces – a very large amount and strikingly different  from other known New Kingdom settlements. For example, my pottery database of the material from Elephantine in Egypt, currently a total of 11002 pieces, only includes 15 fire dogs, thus less than 0.1 %! This seems to be especially relevant because other than this special ceramic type, both vessel types and quantities from 18th Dynasty Elephantine compare very nicely to the corpus from Sai Island. It seems logical to assume that the considerable quantity of fire dogs from Sai is connected with their functional use on the island – a use which still has to be verified! At the moment, it is striking that both sites yielding fire dogs in large numbers, SAV1 West and SAV1 North, are immediately adjacent to the city wall and comprise what seems to be suburban domestic architecture, maybe of a workshop-like character.

I am very much looking forward to the outcome of the ongoing research of Nicole Mosiniak about the fascination yet still very puzzling fire dogs! 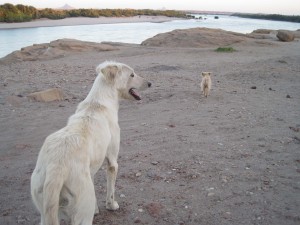