Almost ready to leave Sudan tonight, it’s time to sum up the last 9 weeks here in the field. All of the envisaged tasks and sub-projects within the framework of AcrossBorders have been successfully carried out: excavations at SAV1 East and at the new site SAV1 West; documentation of the architecture at SAV1 North and processing of finds and pottery from all sectors of the New Kingdom town. Furthermore the 3D Laser Scanning of the New Kingdom Town was conducted by Robert Kalasek and Ingrid Adenstedt, Giulia d’Ercole continued her sampling of ceramics from the town for iNAA and petrographic studies, Konstantina Saliari started to work on the animal bones, coming from sector SAV1 North and Erich Draganits carried out geoarchaeological investigations, providing interesting results about the natural sourroundings of the New Kingdom town. 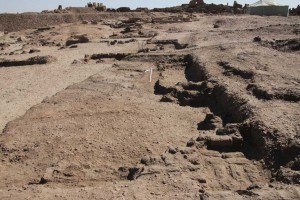 At SAV1 East much progress has been made in 2014 to understand the outline of the major structure, “Building A”. Its date to the mid 18th Dynasty was confirmed; we now know that it extends further to the nor 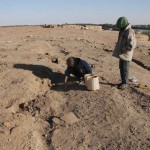 th and to the west. Schist pavements and mud pavements have been noted and especially the western part with small interior walls resembles closely the front rooms of SAF2, the so-called governor’s residence in the southern part of the Pharaonic town – nicely fitting to our preliminary assessment of the building.

However, some of our previous assumptions had to be revised. This holds in particular true for feature 15 – its western part was exposed in Square 4. In 2013, we interpreted this rectangular feature, lined with red bricks on the interior, as an intrusive structure of Post-Pharaonic date and of unclear function. The new findings in 2014 now change the picture a bit: Feature 15 has a minimum extension of 5.6 m West-East and 2.2. m North-South. 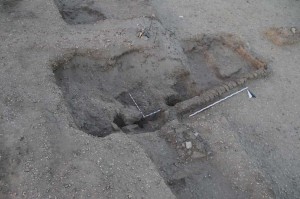 Its western wall is set against the natural pebble in Square 4 – the top part of which is covered with an 18th Dynasty mud floor. The Southern wall of feature 15 is still preserved to a height of 55 cm and the bottom edge has not yet been reached! So it is much deeper than we originally thought! The complete western part of the structure is still covered with very loose back filling of gravel, mud bricks and ceramics. Interestingly, the ceramics deriving from the newly exposed sections of the walls of feature 15 are all consistently mid 18th Dynasty in date – thus, contemporary with the other walls and features of Building A. All in all, the present working hypothesis is that feature 15 represents a New Kingdom storage installation of a rectangular shape, with a vaulted roof located below the floor level of Building A. It is therefore most probably a cellar, set against and dug into the natural gravel. Excavation of feature 15 will continue in the next season.

SAV1 West proofed extremely interesting and rewarding – even if it took us four weeks to clean sandy fillings of pits and later disturbances. As already reported, we found the New Kingdom town wall and also remains of the occupation within the town. Towards the east of the enclosure wall, thus inside the city, large amounts of sandy backfilling of pits and collapsed mud bricks had first to be removed, but then we reached a level in the Eastern half of the Square where in situ New Kingdom structures are visible! 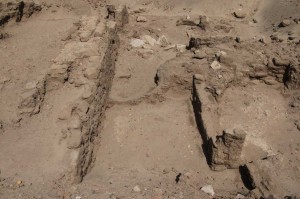 A view into the “wall street” in Square 1 with promising deposits and structures to the East.

Several floor levels and ashy layers attest to a multi-period use of small mud brick buildings orientated along the “wall street” of the western edge of the town, resembling very much the findings in SAV1 North.

Based on my analysis of the ceramics, the mud brick structures and remains in Square 1 of SAV1 West seem to originate from the mid until the late 18th Dynasty. No material earlier than Thutmose III was found, seemingly providing a terminus ante quem non for the building of the town wall and the visible structures belonging to the interior occupation. But of course this will have to be clarified by excavation next year! What we can say now is that there are several phases of use and the early 18th Dynasty is as yet missing. 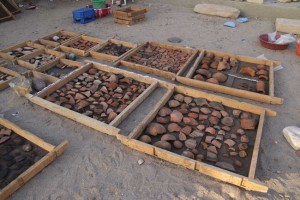 In addition to the Pharaonic building phases, we spend much energy to carefully document the Post-Pharaonic formation processes at SAV1 West. This resulted in a better understanding of the later destruction and also the re-use of the town wall. The destruction happened mostly in (early) Christian time, additions and secondary structures seem to have been added later, partly using the taken out brick work. With the findings of walls in Square 1W, we can trace a continuous use of small shelters set against the ancient wall – they must have been in use over a certain period – details must await a coming ceramic analysis.

To conclude, the 2014 field season resulted in very important insights and added information about the evolution of the Pharaonic town of Sai Island. Especially the period of the mid 18th Dynasty, of the reigns of Thutmose III and Amenhotep II, marked a major remodelling of the site; the material remains illustrate a prosperous heyday of Sai as on of the important administrative centres of Upper Nubia, thus corresponding with the textual sources.