Working on the database of the finds and objects from Sai, New Kingdom town, a brief update is possible, especially regarding the amounts and percentages of categories of finds.

At present, a total of 2397 finds from SAV1 North, 1128 pieces from SAV1 East and 602 from SAV1 West have been registered in the databases. This reflects five years of work at SAV1 North (2008-2012) under the directorship of Florence Doyen for the SIAM, two seasons at SAV1 East and one season at SAV1 West for AcrossBorders. The number of finds from SAV1 East and SAV1 West is actually much higher, but because of time reasons we have not been able to document all of the worked stones and tools excavated in 2014. 850 find numbers have been used in 2014 at SAV1 West – including collections of textiles, bones, charcoal and leather which are not integrated in the small find database but treated separately. At SAV1 East, 898 bags of finds of all types and materials have been excavated. 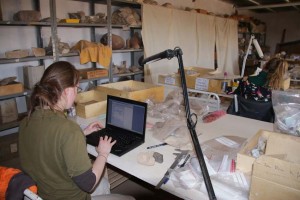 Registration of finds during the 2014 season.

The database of small finds comprises objects of all periods, thus also Post-Pharaonic material – for example, a large number of re-used sherds and figurines are of Medieval date, glass vessels and glazed wares attest to the Ottoman period on Sai and the date for the complete set of stone artefacts still has to be established. 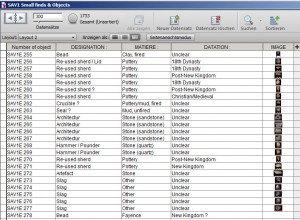 Work in progress: the database of SAV1 East and SAV1 West.

At present, the corpus from SAV1 West is still not representative, but a comparison between SAV1 North and SAV1 East seems possible. The New Kingdom finds at both sectors are dominated by objects of Egyptian type and style.

Following a slightly modified system developed for Memphis (Giddy 1999), six main categories of finds have been established for Sai.

Distribution of finds according to categories from SAV1 North.

Distribution of finds according to categories from SAV1 East.

Category A is the label for figurines and statuettes, mostly of clay and mud. Both human and animal shapes are attested in various sizes and qualities – the total number from SAV1 North is much larger than from SAV1 East but this might be related to the smaller number of objects.

Category B is personal adornment like beads and amulets, making up 4% at SAV1 North, 2% at SAV1 East.

A quite diverse group is category C, household items including large rectangular stands and basin-like installations, but also mud sealings and other objects. At present, the percentage at SAV1 East is more than the double from SAV1 North (5.1% at SAV1 East, 2% at SAV1 North).

Tools and instruments are the largest group and have been labelled as category D. 60% of the finds from SAV1 North, 72% from SAV1 East fall into this set, comprising mostly stone tools like grinding stones and pounders but also re-used sherds.

A small number of stone and faience vessels represents category E, non-ceramic vessels (1% at SAV1 North, 3.5% at SAV1 East). Category F is again very diverse as it comprises models, games and unidentified pieces in various materials. Finally, a number of objects cannot be classified into categories A-F – these are e.g. slag fragments attesting to production processes which are common at both areas.

All in all, it is clear that the finds from SAV1 North and SAV1 East are very comparable and that there are only small differences, especially in terms of percentages of certain group of objects. A detailed contextual analysis, presenting associations between finds and a concise synchronic and diachronic assessment, still has to be established and is scheduled to be undertaken in the upcoming years.