Week 2 at SAV1 East and SAV1 West has just started – our first week of fieldwork passed very quickly, with promising first results! Both sites are keeping us really busy, but already at this early stage some findings are worth mentioning: 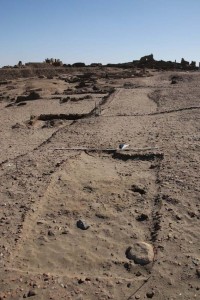 At SAV1 East we are actually following up our work of last year – the western extensions to our first squares at this site mirror the discoveries from 2013. We were already able to trace mud brick remains just below the surface – according to their alignment they could very well represent the western part of Building A – possibly with some entrance rooms and a substantial wall enclosing the large courtyard. Like in the eastern trenches, we are facing the problem of many pits and disturbances dug into the Pharaonic remains – nevertheless we are very optimistic to come up with a more complete understanding of the 18th Dynasty building activity in this area in the next weeks. 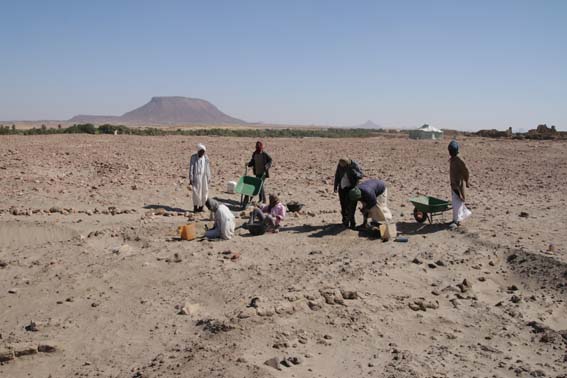 In both trenches at SAV1 West in situ remains of the enclosure wall have been unearthed. Associated small finds and the ceramics support its dating to the 18th Dynasty. Especially at Square 1 the amounts of New Kingdom pottery are huge – east of the wall we have large assemblages of mid 18th Dynasty ceramics, comparing well to SAV1 North and also in some respects to SAV1 East. Especially remarkable are a considerable number of Nubian cooking pots, of so-called Fire dogs, of fish dishes and painted wares! One of my favorite pieces which just came out today is a Blue painted sherd – until now this particular type of decorated ware was very rare at Sai – will our current excavations modify this picture?

We also started to register the small finds and tools – some of the highlights are net weights, Nun bowls and female figurines – all very well known from other Egyptian sites and also within the Pharaonic town of Sai.

All in all, we are more than happy with the outcome of the first week and very keen to continue the investigation of life at Sai Island during the New Kingdom! Lots of questions are still open…