Yesterday, Sebastian Stiefel and I have happily arrived on Elephantine Island. Thanks to our cooperation with the Swiss Institute for Architectural and Archaeological Research in Egypt and the German Archaeological Institute Cairo, we will work here in the upcoming weeks on New Kingdom ceramics, excavated in settlement contexts in various areas of the ancient town. Our special interest is of course a detailed comparison between the material from this important Egyptian site just north of the First Cataract and the finds from Sai Island in Upper Nubia.

While Sebastian is already busy in drawing ceramics, I am currently sorting through boxes and checking database entries. Today, I had the nice opportunity to come back to contexts I’ve worked on in my first season of the New Kingdom ceramics project, back in 2000! 13 years later and with much more experience and a wider knowledge of parallels, I took a fresh look at certain samples and specific sherds which posed some problems.

Among these sherds is an intriguing type of vessel: carinated dishes with incised wavy lines and finger pinched or cut rims. These dishes are regularly red washed, sometimes with additional white as decoration, and they often show vertical applications on the upper part of the vessel. This type is commonly associated with the Second Intermediate Period pottery tradition in Egypt; early variants are already attested since the late Middle Kingdom in Egypt, but these dishes are more common during the Second Intermediate Period (cf. Budka 2011: 29-30). 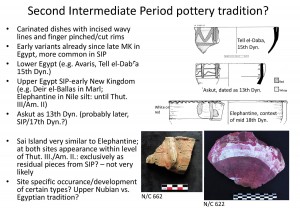 Back in 2000, I therefore concluded my sherds from early 18th Dynasty context must be residual pieces – traces of the former occupation during the 17th Dynasty. But now, with both more material from Elephantine and the very close parallels from Sai Island, I would interpret this differently. It seems as if certain variants of these carinated dishes survived up to Thutmoside times, at least to the reign of Thutmose III. At Elephantine, we not only encounter it in Level 10 (Bauschicht 10, early 18th Dynasty to Hatshepsut), but also rarely in the following Level 9 of mid-late 18th Dynasty date. The same holds true for Sai – Level 4, early 18th Dynasty and Level 3, Thutmoside-late 18th Dynasty, produced examples of such vessels. Furthermore, our colleagues working at Sesebi also found similar types in 18th Dynasty contexts (Spence, Rose et al. 2011: 35, fig. 5). 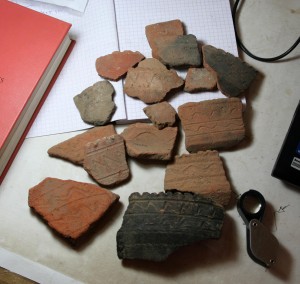 With the present knowledge, I therefore feel reluctant to explain all of these wavy-line decorated carinated dishes from New Kingdom strata as residual pieces, originating in the Second Intermediate Period. Rather, this particular type illustrates that we have to think about possibly very long traditions of ceramic types as well as regional productions and local preferences. Second Intermediate style was not completely passé by the time of the 18th Dynasty! This is very obvious at both Egypt’s Southern border as illustrated by Elephantine and in Upper Nubia with Sai Island as a case study.