Back in Vienna, processing the data from the field season is keeping us busy. The most important discovery of 2013, Building A is of course still one of the focal points. In general, the new work in area SAV1 East has produced further evidence that the New Kingdom town on Sai experienced its heyday during the reign of Thutmose III and added important knowledge concerning the general layout of the town.

Despite of its fragmentary state, a tentative reconstruction of Building A is possible. Please note that this is a first assessment, any comments are very welcome! 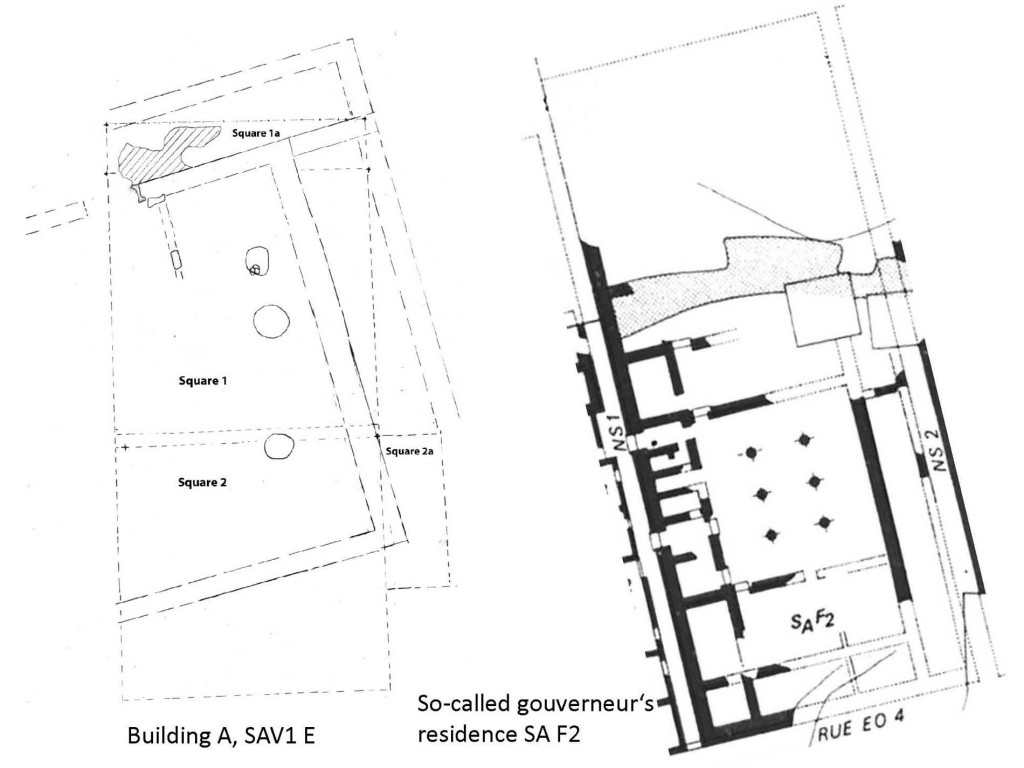 Our “North”, “East” and “South” walls clearly frame a central part of the complex, but are not the outer enclosures or outer walls. This became clear as we unearthed an area covered by a floor north of wall 21 in Square 1a. This floor (marked as hatched area on the sketch above) was partly cut by later pits filled with dump material, but it is clearly contemporaneous to Building A. So we have a paved area towards our northern limits of excavations. The “Northern” wall running East-West has an obvious corner in the Northwest part of Square 1 – we might interpret this as an entrance situation, a possible doorway into a large courtyard, occupying most of Square 1 and extending into Square 2. Within this courtyard there were several pits, of which feature 6 was the most substantial circular storage installation. Towards the east, this courtyard is flanked by wall 3. This wall allows calculating the North-South extension of this part of Building A as 16.3 m; the East-West extension of the courtyard is still not fully exposed, but was traced as up to 10 m until the baulk of Square 2.

As was posted earlier, Building A finds a very close parallel in the so-called governor’s residence SAF2 in the Southern part of the New Kingdom town. The central part of this building is not a courtyard but a large columned hall with a mud brick pavement. The eastern extension of SAF2 can be compared to our traces of a mud brick wall in the Northeastern corner of SAV1 E – broken off towards the East due to the sloping ground, it is very likely that there was once a kind of annex alongside the courtyard.

Furthermore, and in analogy with SAF2, one might expect a series of small entrance rooms in the western part of Building A which is still not yet excavated. This will be investigated by means of excavations in 2014!

The functional interpretation of Building A must stay open for the moment, but we might have unearthed another administrative building within the Pharaonic town of Sai, with possible links to Temple A and/or SAF2. It is striking that we could date Building A as contemporaneous to these major buildings in the Southern part of the town which all share a common East-West-alignment along a North-South axis, thus following the typical grid pattern of fortified New Kingdom town in Nubia.

All in all, our newly discovered complex at SAV1E seems to support the important role of Sai within the Egyptian administration in Upper Nubia during the 18th Dynasty.