Simply a perfect start into the New Year – we arrived safely yesterday on Sai Island, early enough to enjoy the beautiful sunset! 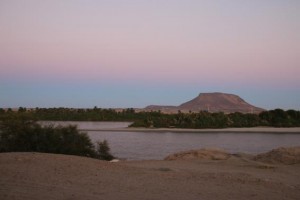 Today we got settled and are currently preparing everything to start excavating on Saturday. With the beginning of 2014, I have furthermore the pleasure to welcome two new team members of AcrossBorders, both of them will also join us in a few days on the island.

Erich Draganits studied Geology and Prehistoric Archaeology at the University of Vienna. Within the Earth Sciences he is specialized in clastic sedimentology, deformation of sediments, landscape evolution and Earth surface processes. Based on his expertise and interest in interdisciplinary research he carries out geoarchaeological studies at numerous archaeological excavations including diverse sites, periods and countries like Austria, Italy, Greece, India, Turkey and now also Sudan.

This January, Erich will conduct a first geoarchaeological survey (including drilling and test pits) on Sai – investigating the harbour situation, geological formations, sandstone quarries and more. He will closely cooperate with Konstantina Saliari and also Giulia d’Ercole who is investigating the clay deposits of the island related to her research on the local pottery production.

Konstantina Saliari is the second newcomer. She has studied archaeology and prehistoric archaeology at Athens where she received her MA in 2011. She is currently a PhD student of the University of Vienna and has joined AcrossBorders as researcher specializing in zooarchaeological remains. In the upcoming season, Konstantina will work on animal bones coming from the site of SAV1N within the New Kingdom town of Sai.

Environmental and climatic settings and changes are important issues for our research questions and the aim to reconstruct living conditions at Sai Island during the New Kingdom. We aim at estimating the human interaction with the landscape and will tackle the question of the location of settlement areas and cemeteries over the ages. Assessments of real living conditions in the past are essential to understand the relations of the Egyptians living on Sai with the indigenous Nubian population.

Just one small example – from Egyptian texts, temple reliefs and wall paintings we have plenty of evidence that various wild and domestic animals were imported to Egypt from Nubia.

Davies & Gardiner, The tomb of Huy, Theban Tomb series vol. 4, pl. 48: Boat with cattle from Nubia, being brought to Egypt.

At least five different types of cattle are mentioned in the texts! For example, the beautiful paintings in the tomb of viceroy Huy at Thebes show jw3-cattle being brought from Kush. It is intriguing whether there are possibilities to reconstruct differences between cattle also in reality, using the corresponding bones. How do the actual remains relate to the texts and pictoral representations of Upper Nubian animals in general? What kind of wild and domestic animals can we trace at Sai Island and can we estimate their numbers? 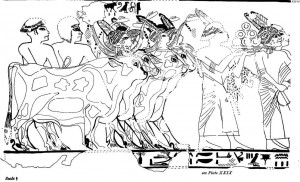 Joint research by Erich, Konstantina and others will help to understand the environmental conditions on Sai – the expected new data will allow putting the island in a broader context and can also adress very detailed questions about living conditions in Kush.

I am very happy to welcome Erich and Konstantina as new team members, looking forward to their first results this season!