The aim of the geoarchaeological fieldwork within the framework of AcrossBorders was to expand our knowledge about the existing rock types, their relationships, Quaternary sediments, geomorphological evolution and estimations about possible Nile erosion processes at the site of the Pharaonic settlement. The scarcity of vegetation, presence of riverfront exposures as well as excellent outcrops provided by excavated graves offer great geoarchaeological working conditions.

Sai Island is situated between the 2nd and 3rd Nile cataracts, which are a result of a large scale east-west trending tectonic uplift zone, which forces the Nile to incise into uplifted Neoproterozoic crystalline basement and its sedimentary cover (Thurmond et al. 2004). Consequently, Sai Island comprises medium-grade metamorphic Precambrian rocks (amphibolite, dolomite, quartzite, biotite gneiss, calcite marble) in the west and southeast, dipping around 30° towards the Northwest. These rocks are commonly cross-cut by large quartz-veins.  In the central and northern part of the island these meta-volcano-sedimentary rocks are overlain by subhorizontal Nubian Sandstone, mainly consisting of medium- to coarse-grained fluvial quartz sandstone, conglomerate, rare siltstone and occasional silicified wood. 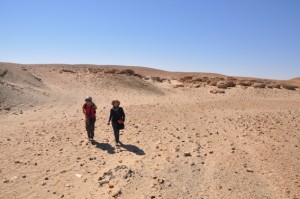 Almost all of these rocks are covered by thin layers of comparably much younger Nile sediments (in some places with Palaeolithic artefacts) and only the Nubian Sandstone of Jebel Adu raises as an Inselberg from the flat terraces surfaces (van Peer et al. 2003, Anonymous 2005). 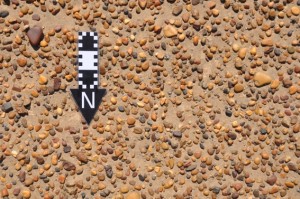 The rock types occurring at the site of the Pharaonic settlement in general reflect the geological reality of the island and most of them are locally available. By far the most common rock types are quartz sandstone and amphibolite, while vein quartz, calcrete, biotite gneiss, calcite marble are comparable rare. Rock types which probably have been brought to the island include granite, diorite, gabbro and gypsum.