As processing of the 18th Dynasty pottery from SAV1 West, 2014 season, continues, new information comes up daily! As reported, the material is closely similar to the pottery corpus from sector SAV1 North and also SAV1 East. However, there are also some – maybe significant – differences. For example, the amount of Blue painted pottery is remarkable; as in SAV1 East, we do encounter a number of conical bread moulds, these have been largely missing at SAV1 North.

Another intriguing group of vessels are the so-called “fish dishes”! A number of Marl clay examples were found in Square 1 at SAV1 West. 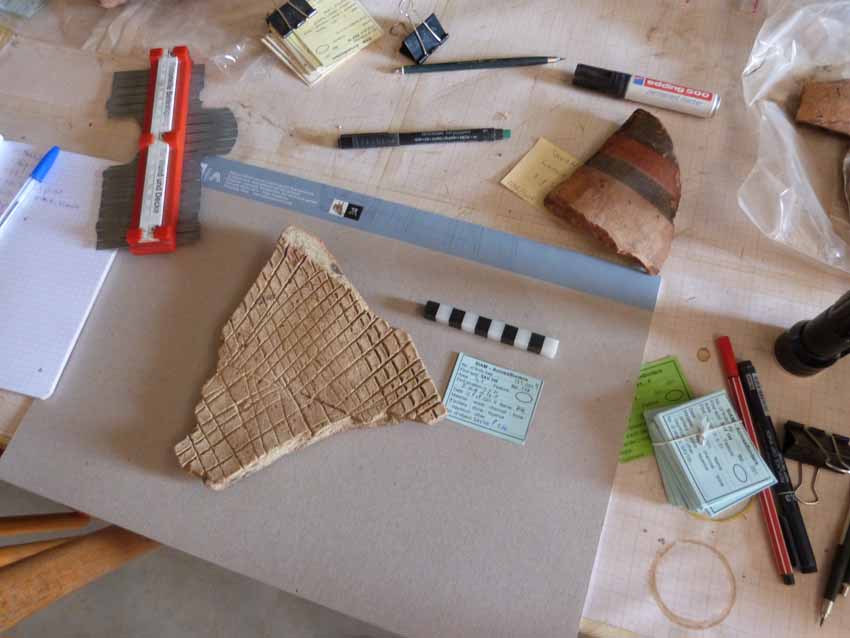 This large fragment illustrates the geometric decorative pattern inside. In exactly the same style, but made in a local Nile clay, more than 10 fragments came up in the fillings of Building A at SAV1 East this season! Does this indicate a difference between our two current excavation areas? Or could it also be that my previous assumption, based on the comparison with Elephantine was completely wrong? I did speculate last year because there are more Nile silt “fish dishes” from Sai Island than Marl clay version that different from the situation in Egypt, the “real” Egyptian Marl B/E trays had been frequently reproduced in Nubia in local material. Are the new Marl dishes from SAV1 West just an accidental find? Or are they of chronological significance, maybe originating from a phase with the first “supply” of Egyptian functional wares? But how would this correspond to the findings of Nile “fish dishes” from SAV1 East which date to the heyday of Sai in the 18th Dynasty, the time of Thutmose III and Amenhotep II. It is especially this era when a lot of high quality material, including decorated Marl clay vessels, was brought to the temple town of Sai.

All in all, the picture deriving from the New Kingdom town of Sai Island gets more and more complex the better we understand the architectural layout, the structure of the town and especially the material culture! Every small pottery sherd potentially adds information…

Next week I will focus among other things on the large amount of incense burners, footed bowls and dishes with pigments, possible painter’s pots from the 2014 season. The pottery gives a nice glimpse into past activities at SAV1 West which we still have only touched on a superficial level.