One of the best known pottery wares from Pharaonic Egypt is the so-called Blue painted ware, popular from the mid 18th Dynasty until Ramesside time and thus obviously a good example for a time-specific taste regarding the decoration of ceramics. Until now, Blue painted pottery was found in rather limited numbers in Nubia, at both cemetery sites like Tombos and also at New Kingdom settlements like Sesebi, Amara West and Sai Island.

The number of Blue painted sherds coming from the fortified town of Sai was very small before this season – by now we have more than doubled it, but there are still not more than a good dozen fragments of this specific ware!

In 2014, both Marl clay and Nile silt wares with blue decoration have been unearthed at SAV1 West. The Nile clay vessels are simple beakers with linear design, the Marl clay vessels are larger in size, closed shapes and with more fancy motifs. My favourite piece is a large body sherd with a beautiful design, found east of the enclosure wall. 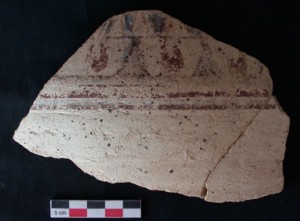 It is a Marl clay vessel imported from Egypt, an uncoated ware (Vienna System Marl A3 variant) with the decoration executed in blue, black and red. It finds perfect parallels in Egypt, especially in my corpus of blue painted vessels at Elephantine. It falls into the category of the very early, pre-Amarna type of Blue painted ware. Well dateable to the mid 18th Dynasty thanks to comparisons, this corresponds to its archaeological context at Sai – the vessel belongs to the phase when the site experienced its heyday during the reigns of Thutmose III and Amenhotep II.

For now the new Blue painted sherds from Sai are very useful for dating, but in general I do hope that we will be able to contextualise them as well – using them as small indicators for what seems to have been a quite sophisticated lifestyle here in Upper Nubia during the 18th Dynasty.