A little hard to believe, but I am almost ready to leave Sudan and return to Munich! 11 weeks since we arrived here in Khartoum, 10 very exciting weeks of fieldwork, lots of new discoveries and much food for thought!
Thanks to the excellent working conditions provided by the local authorities to archaeologists in Sudan, we are able to export samples for scientific analysis – this will allow us to update and check some of our preliminary data from the field further in the next months.

The most important results of this 2017 season are as follows:
At SAV1 West, remaining deposits in Squares 1S and 1SE were investigated. The remains of several small mud brick buildings including one storage pit and one cellar were exposed and stratigraphic information was received from cleaning selected areas, including the “wall street” along the town enclosure. Most importantly, the earliest phase of occupation at SAV1 West seems to be contemporaneous to the one at SAV1 North – and predating the building of the town wall under Thutmose III. Only scarce remains of the early 18th Dynasty occupation at SAV1 West have survived, with the major phase in the mid-18th Dynasty partly superimposing earlier structures.
At SAV1 East, excavation was completed in Square 4C, finding more schist pavements. Other floors and mud bricks of already known structures. An extension was added towards the southwestern part of the site in order to trace a mud brick wall and in situ schist pavement further (new Square 4D, 6.5 x 9m). Within Square 4D, two large cellars were discovered (Feature 83 and Feature 85). Their size (3.3 x 1.8 x 2.00m and 3.7 x 1.5 x 2.05m) and East-West alignment corresponds nicely to the previously excavated structure, Feature 15. While Feature 83, the southern cellar, was disturbed by a pit in its western half down to the bottom, and only had in situ 18th Dynasty vessels left on the pavement in the eastern half, Feature 85 was found with its vault still partly intact. 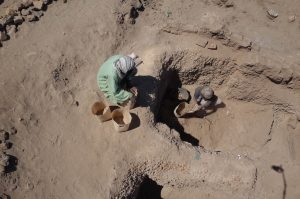 Work in progress in feature 85.

Tomb 26, discovered in 2015, was completely excavated in 2017. Feature 4, the trench in the north, was cleaned and yielded a number of burials. Chamber 6, the northern burial chamber, held two coffins of which only traces survived in the flood sediments as well as rich burial equipment of Egyptian style: scarabs, faience vessels, pottery vessels and one stone shabti were used as burial goods. Traces of the funerary masks have also survived. According to the inscribed finds and the human remains, the double burial in Feature 6 can be identified as the master of gold workers Khnummose and an anonymous female person. Finally, Feature 5, the chamber located to the west of Chamber 2, yielded 9 adult and 2 infant burials, again with a nice selection of finds comprising scarabs, amulets and pottery vessels as well as few traces of the funerary masks and coffins.

All achievements of this season would not have been possible without great team work – many thanks go to all colleagues and students working in the field and the magazine who coped so well with time pressure and loads of finds, to all of our local workmen who faced together with us at SAV1 East nimiti-attacks which were just as bad as in our first year back in 2013! And of course to our wonderful NCAM representative and inspector Huda Magzoub, as well as to the great house staff, Sidahmed, Osama and Ridda. Last but not least, the dig dog Ramsis and his cute and entertaining off springs brought much comfort in dark black-fly hours! 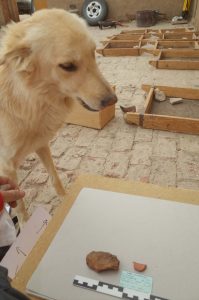