As recently highlighted on the “Archäologieblog” at DerStandard.at, Tomb 26 really yielded fantastic finds, especially in the current 2017 season.

We have finished clearing Chamber 6 (holding the burial of Khnummose and presumably his wife) and now also Chamber 5. In the latter, all together a minimum of nine adults and two infants (one pre-natal) were buried – with quite rich equipment and nicely preserved, although partly smashed because of the collapsed roof of the chamber.
The best preserved and probably two earliest burials were put in East-West direction (head to the west) in the southern part of the chamber. Probably a male and a female, these two burials resemble the ones discovered in Chamber 6 – remains of the painted wooden coffins, the wooden funerary masks with eye inlays and gold foil applications were found as well as faience scarabs and intact pottery vessels. Most exciting are here four small pottery vessels which were found next to clay lids with human heads – a very charming small sized variant of clay canopic jars! 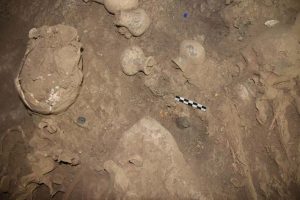 Some of the finds including pottery “canopic vessels” in the head area of the southernmost burial in Chamber 5.

But the highlight of Chamber 5 is clearly a very nicely worked scarab ring made in gold and silver – still found in situ between the legs of a female individual close to the entrance of the chamber. The quality of it is simply amazing, really the work of a very skilled craftsman – probably a master goldworker… 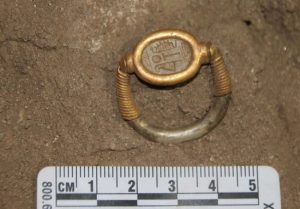 Not only the highlight from Chamber 5, but one of the most beautiful objects from Tomb 26!

Unfortunately, no personal names have survived from Chamber 5. The pottery and funerary equipment suggests a date in the mid-18th Dynasty, thus very close to Khnummose’s burial – for now, I would therefore like to suggest that at least some of the persons buried in the western Chamber 5 were related to the master gold worker Khnummose. The quality of the finds, especially the jewelry and also the use of gold foil, would definitely seem suitable for a family of gold workers living on Sai during the 18th Dynasty.
Tomb 26 will keep us very busy in the next weeks and months – but for now, loads of thanks go to Andrea Stadlmayr and Marlies Wohlschlager for their excellent job – alf mabruk, more than well done!