In week 8 of our current fieldwork season on Sai, we started excavations at sector SAV1 East with a group of workmen. We extended our excavation area towards the southwest, opening a new square labelled Square 4D, hoping to get more remains of the mud brick structures we found last year with in situ-schist pavements. 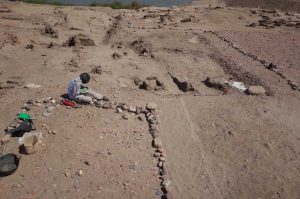 First day at SAV1 East, with part of the extension Sq. 4D visible.

Making very good progress, we have indeed exposed already a new mud brick wall which is exactly in line with the one in Square 4C! Some of the bricks of this wall are burnt, lots of ash and charcoal were found adjacent to it. Together with a very large proportion of 18th Dynasty bread moulds, I am wondering again – like I did in earlier season – if SAV1 East is connected with the production of bread for the nearby Temple A. The amounts of ceramics are still in general amazing: I processed 112 baskets of pottery from only 5 working days! Dating confirms earlier results: a very good presence of mid-18th Dynasty material, some late 18th Dynasty and few Ramesside sherds, all together with mixed material from later periods up to Ottoman times.

Work in the magazine with registration, drawing of pottery and small finds is progressing very well. This week, Daniela Penzer joined Oliver in making drawings of pottery, Lucia Sedlakova concentrates on objects from the town area.

Regarding new finds, the usual stone tools, clay beads, female figurines and reused sherds came in this week from SAV1 East. Our registrar Meg Gundlach is still mostly occupied with wonderful things from Tomb 26 – more scarabs, more amulets and more gold foil from funerary masks. The beautiful crocodile amulets – now a total of 4, probably all belonging to a female adult buried in the northern part of Chamber 5 – were photographed and described in detail. 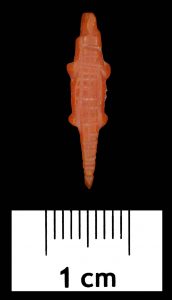 In addition, with the re-arrival of Cajetan Geiger, the new chambers and excavated areas of Tomb 26 were completely surveyed and measured. 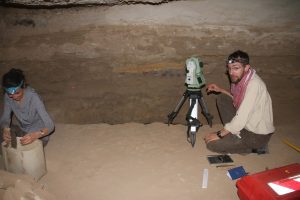 With the end of our season approaching, Andrea, Marlies and me will now spend a productive Friday in Tomb 26 – aiming to finish documenting it today! An update will follow shortly.