After a short mid-season break, we continued today with some of our workmen at SAV1 East and SAV1 West – our cellars are keeping us busy. 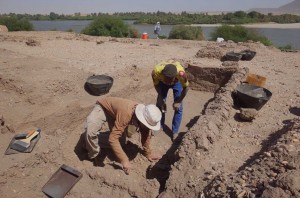 The results from feature 15 are especially interesting: yesterday, I had the chance to sort the material sieved on Thursday – and, as I was very much hoping for, a quite considerable number of clay sealings came up! At least on 25 pieces a part of the seal impression is still preserved – including royal names, exciting and highly relevant! 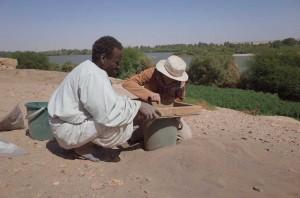 Today, thanks to the help of our washing man, I was now able to check the dating of the pottery from the context the clay sealings were found. Of course, this is for now just a preliminary assessment! 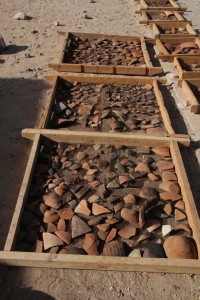 Hundreds of sherds from feature 15 have been washed already and are waiting to be processed.

Both ceramics and sealings cover a quite large time frame – ranging from the late Second Intermediate Period to Thutmoside times. At least two seals give the name of Thutmose III (Men-kheper-Ra) – this fits perfectly to the previously assumed building date of Building A and feature 15 based on the ceramics – both on the sherds from the last season and the newly excavated material. However, just in the last bag of the sieved material I checked today another seal impression came up: unfortunately broken in its upper part, the lower part of the scarab clearly reads “…-Maat-nb” – so probably this refers to no one else than Amenhotep III, Neb-Maat-Re! As of yet, the pottery does not support such a late date… Amenhotep III is however well attested on Sai Island and plenty of pottery excavated this season from SAV1 West is datable to his reign.