Every archaeologist has experienced it: unexpected finds and new structures appearing of course on the very last days of fieldwork, changing the well-set schedule and planning – tearing one apart between joy, excitement and frustration because of challenging new tasks… Officially, fieldwork ended today in the New Kingdom town of Sai – five very successful weeks came to an end at both SAV1 East and SAV1 West. However, two cellars will keep us busy in the upcoming days… And both of them hold much potential – so we’re very happy despite the change of plan! Luckily, we still have one week left before we move on to the New Kingdom cemetery which will be the focus of the second part of AcrossBorders’ fieldseason.

Not a real surprise is that work at feature 15 will continue – its state of preservation is even better than I was hoping for: already five complete 18th Dynasty vessels were unearthed, together with a large number of pot sherds – and more are still waiting for us in a seemingly undisturbed backfilling. Because sealed contexts are very rare at SAV1 East, we started to sieve all the material from this ashy deposit filling the eastern part of the feature – slowing down the working progress as were the nimiti and the heat today. The importance of feature 15 lies in its potential for fine-dating the early phases of use at SAV1 East. 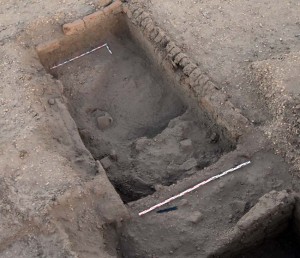 Feature 15 will keep us busy…

A real surprise was on the contrary the discovery of a collapsed cellar in Square 1 at SAV1 West – causing us to extend this trench from 2014 once again, now towards the East. This structure still needs to be fully excavated and promises interesting material, probably of mid-18th Dynasty date. 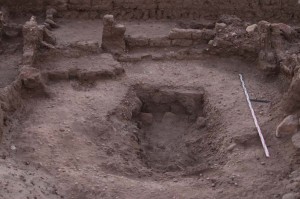 Unexpected find at SAV1 West: a cellar still to be fully excavated.

Although we will see some of them soon again, I want to take this opportunity to thank all of our Sudanese workmen: Like in the last years, the gang directed by Imad Shorbagi did an amazing job – without them our work would not be possible and this is very much appreciated. 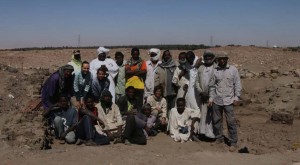 The 2015 team working in the Pharaonic town.