Exactly 2 years after I first posted something about an intriguing structure at SAV1 East, I am back at work there – aiming to finally finish excavating a feature which gave me already much to think about…

Originally believed to be a Post-New Kingdom, intrusive structure set into the courtyard of Building A, I now think that feature 15 is a large rectangular cellar of the 18th Dynasty building horizon at SAV1 East. Its inner side is lined with red-bricks and a plaster coating – quite unusual and so far without parallel in our working areas on Sai Island.

Its full excavation was delayed due to several reasons, also because its northern wall runs directly below our baulk between Squares 1 and 2 respectively Squares 3 and 4.

In the last days we successfully removed this baulk and the upper backfilling levels which are nicely illustrated here in the SFM model created by Martin Fera of the status in February 2014!

Buried below windblown sand and some debris, we found and cleaned more of the bricks of feature 15 today, but a lot of back filling still remains to be removed… work continues! 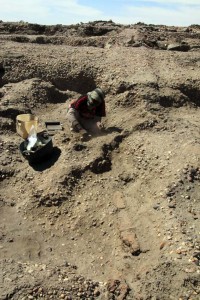 Exposing more bricks of the northern wall of feature 15.