It has been a very busy and challenging week – very hot and loads of biting nimiti-flies in the first half, now a bit cooler and windy. Giulia D’Ercole, Huda Magzoub and me went to Kerma for our very successful pottery workshop, bringing together a number of colleagues working at other New Kingdom sites. During the two days we were gone from Sai, Martin Fera, Stefanie Juch and Jördis Vieth supervised the cleaning of SAF2, the so-called governor’s residence. Despite the splendid results of the Laser Scanning Campaign in 2014, we were aiming for a better understanding of this key building in the southern part of the town, especially its pavements. Ingrid Adenstedt, presently busy working from back home in Vienna, will include our new SFM model from this season for her general reconstruction of the Pharaonic remains in the town area. 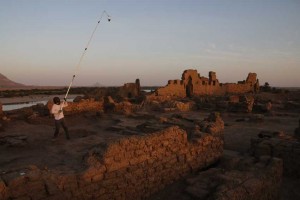 In the magazine, Giulia was busy collecting new samples for our iNAA analysis – the current focus is on what we assume to be Egyptian Nile clay wares, produced in Egypt and imported to Sai. We sampled already a number of cooking pots in 2014 – now various types of dishes, plates and small beakers will be tested.

Ken Griffin and Meg Gundlach continued their fantastic job of organizing the storage of finds after the registration of each object – everything from small faience beads to re-used sherds, figurines, curious wooden objects, abundant stone tools to architectural pieces.

At SAV1 East, work focused on Square 4 and 4a. As reported in an earlier post, we found new sections of walls in this southern part of the area. Today a large area still covered with what seems to be an early 18th Dynasty pavement was unearthed in the southwestern corner. We are very exciting about this good state of preservation and will continue in this part of SAV1 East in the upcoming week! 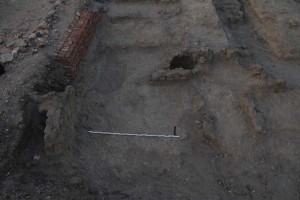 New sections of mud brick walls and remains of a nice pavement in the western part of SAV1 East.

At SAV1 West, Martin Fera and Stefanie Juch focused on the eastern half of Square 1S. In the last two days, we managed to join this new trench with Square 1, excavated in 2014 by removing the latters southern baulk according to its stratigraphy. The deposits and findings in both squares closely resemble each other and allow to a much better understanding of the occupation phases within the town. 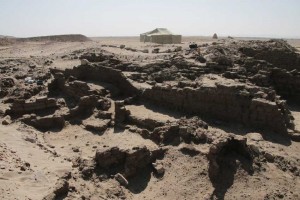 Present status of eastern half of Square 1 and Square 1S in SAV1 West.

At present, the dating of the exposed mud brick structures sitting on stratigraphic layers and cut by later pits is still unclear – there are hints for a date much later than the 18th Dynasty. However, checking today’s pottery from Square 1, there was quite a pleasant surprise: the uppermost filling, still covering what seems to be the early occupation (with several phases), yielded a significant amount of early 19th Dynasty sherds! This is extremely exciting! We know of course about activities under Seti I on Sai, but until today these were scattered and fragmented finds, archaeological proof of a continuous occupation is still lacking…  Much potential and many open questions for our next week of work!

Furthermore, during this week Miranda Semple, the project’s micromorphologist, started sampling with a focus on SAV1 West. Especially promising are samples from the small “wall street” running along the town enclosure wall potentially highlighting daily activities such as waste but also giving information about the maintenance of the street etc. 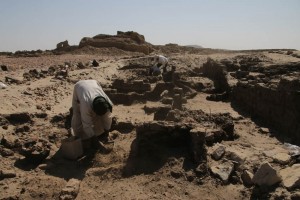 Simultaneously with the excavation, the first micromorphological samples were taken this week.

Samples from inside the newly exposed buildings will complement these street remains and hopefully help us to understand the very complex formation processes at SAV1 West.

Sayantani Neogi, the project’s geoarchaeologist, was very busy these days with research on the sandstone cliff along the eastern side of the town and the question of a possible landing place during the New Kingdom. Her first observations are already highly interesting and important for reconstructing the past landscape.

All in all, the first four weeks of AcrossBorders’ 2015 field season were extremely productive and have yielded significant new data – confirming results from the last seasons, but also giving room to new thoughts and innovative lines of research.

4 thoughts on “The New Kingdom town of Sai: end of week 4”