At SAV1 East, excavation of the large building complex, Building A, is ongoing, supervised by Jördis Vieth and Huda Magzoub. Previous work has enabled us to make comparisons of this complex with the governor’s residence in the southern part of the town. Building A dates to the mid-18th Dynasty.

Like last year, we are currently finding large numbers of schist (amphibolite) fragments in the western part of SAV1 East. Because many of these fragments are still coated with gypsum/plaster we think that this part of Building A was once equipped with a nice schist pavement. 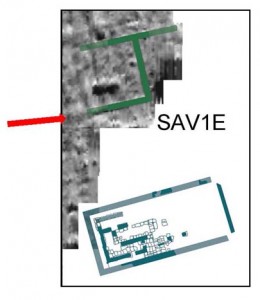 Plan of SAV1 East with Building A highlighted. The arrow marks our present working area.

Most exciting about this week’s work in Square 4 is the confirmation of traces visible on the geophysical survey map from 2011: we have located another “negative” wall of Building A – obviously the continuation of its major wall in the south, running roughly east-west. Some of the bricks are still left in place, but most of the material has been taken out as it was the case with the other walls of the structure. However, the remains are sufficient to confirm once again the dating and they will enable us to reconstruct the ground plan of Building A in its southwestern corner. 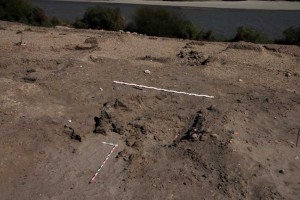 Newly exposed area of Building A: note the sandy trench marking the “negative wall” and the bricks still in situ.