This past week a curious wooden object (SAV1E 1913) was unearthed at SAV1 East, currently being excavated by Julia Budka, Jördis Vieth and Huda Magzoub, which has generated much discussion between the team and the house staff. At first there was disappointment as it was thought that, based on the shape of the object, we had stumbled across a modern tool (screwdriver), which had been discarded by earlier excavators of the site. However, once the object had been removed from the trench it was clear that this was not the case. 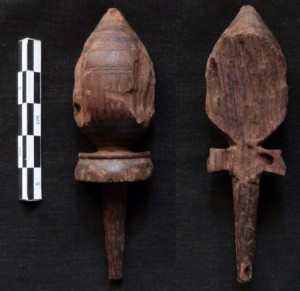 The object, which is approximately 10cm in length, appears to be broken roughly in half lengthwise. The top of the piece is bulbous in shape, ending in a slight point. It is nicely embellished with three lightly incised bands, each consisting of three strands, which encircle the piece. This leads to a platform, just less than 1cm thick, which contains a slight decorative lip at the top. Finally, the object contains a fairly long and slender rod, which tapers at the point. Looking at it from the broken side, the piece resembles the shape of the familiar Egyptian ankh-sign.

What exactly is this object and what era does it date to? It was excavated in a substantial debris layer along the southern edge of Square 4, comprised of mixed material ranging in date from the early 18th Dynasty to the Ottoman period.

One suggestion is that the object is part of a decorative piece of furniture, perhaps the knob from a chest of drawers or something similar.

The main problem with this is that the rod would extend too far into the furniture, which seems impractical. Could the object be a wooden spindle, a device to spin fibres into thread? While it is an attractive proposal, this time it seems that the rod would have been too short! 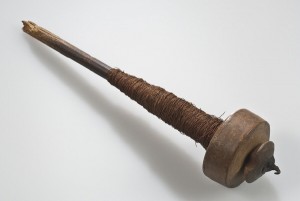 Another suggestion is that it could be a top or spinning top, a toy which is designed to be spun rapidly on the ground. Despite the fact this type of toy is known from as early as the Pharaonic period, the overall shape makes this also unlikely.

Perhaps the most practical use for the object, as proposed by our Sudanese housekeeper Sidahmed, is that it is part of a kohl pot. In this case, the bulbous part would form the handle, the platform would act as the lid, and the rod would be used as an applicator for the kohl. While kohl is a well-known cosmetic to be used by the Egyptians, it can still be found in many African countries today, such as these elaborate examples from Morocco. Therefore, the date of the object could range from the Pharaonic Period to modern times, with the latter bring the most likely scenario. 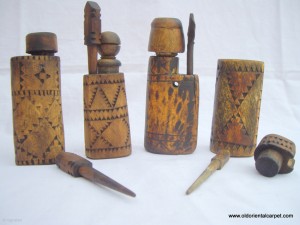 We welcome any suggestions and comments from our readers both on the function of this object and its dating!

5 thoughts on “A Curious Wooden Object from SAV1 East”