In the course of every season at Sai we find a lot of great material culture that never appears in the blogs, either in the form of the weekly highlights or themed object posts. Some of these things are rare and beautiful. Some of them are weird and wonderful. So, we thought we would start a series of posts to showcase some of our favorite finds of the season. Hopefully you love them as much as we do! 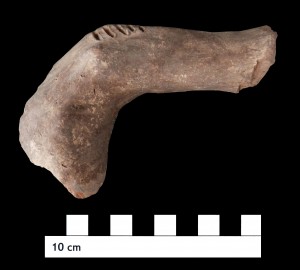 Here at Sai we are no strangers to figurines. In fact, there are nearly one hundred entries in the database classified as figurines, most often zoomorphic. Of this large collection, none are quite like SAV1W 1677…

SAV1W 1677 is the head portion of a larger animal figurine. The eyes are represented by small points of clay pulled out from the head. Between the eyes are nine incised lines, which look very much like the mane of a horse. The elongated mouth and nose of the figurine are also rather equine. Horse figurines are well known within our corpus, with many already featured here on the blog. 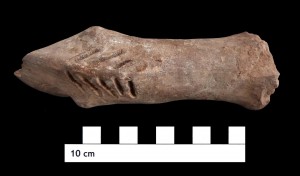 However, it is clear that these features have been grossly exaggerated for this figurine—the snout itself is 60mm in length! Furthermore, rather than the rounded muzzle of a horse, here the snout flares out and the end surface is concave. No incised details for either the nostrils or mouth have been added. Unfortunately the surface is slightly burnt, so it is not possible to tell if additional details were also added in paint.

Thus, it may be that this creature only shares equine features and is not intended to portray a realistic horse. Perhaps it is simply a creation living only in the mind of the artisan. And being on an island, isn’t it possible that their fictional creatures are river dwellers?  Could this in fact be evidence of a local Nile monster? The Nubian Nessy!?