As planned, excavations at SAV1 West have come to an end after 5 weeks. At SAV1 East, there are still small things to do – first of all, the final cleaning in feature 15, the large cellar which yielded numerous clay sealings and complete pottery vessels in 2015. The westernmost part of the structure was left unexcavated last year.

At SAV1 West, work focused during this week on feature 123, a very interesting, but still obscure structure with several building phases. In the surroundings of feature 123, remains of occupation deposits and some pavements were documented. 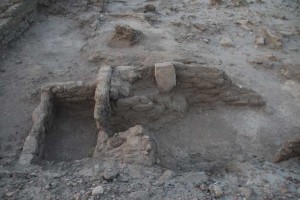 Feature 123 had several building phases and experienced modifications during its lifespan.

We also returned to Square 1NW – located in the norther western part of SAV1 West, first opened in 2014 and covering an area in front of the enclosure wall, outside of the Pharaonic town. Interesting remains of mud brick structures and floor levels were observed and will be documented in the upcoming week – hopefully we will be able to add information to the layout of the western façade of the 18th Dynasty enclosure wall – and the later reuse of this area outside of the town.

With the arrival of Sean Taylor and Sayantani Neogi, some micromorphologial samples were taken in SAV1 West and SAV1 East. Complementing our digital landscape model based on kite photography by Martin Fera, Sean and Sayantani also started augering in the western part of the site in order to understand the ancient topography within the context of the New Kingdom town.

Work at SAV1 East focused on the extension towards the northwest – Square 4B1 yielded not only in situ schist fragments and fragmentary walls, but also a very nice sandstone column. 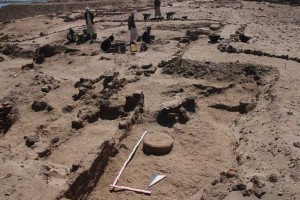 Overview of Square 4B1 in SAV1 East with a sandstone column close to the in situ-remains of the schist pavement. Note the differences in levels!

Some areas at SAV1 East with 18th Dynasty deposits in Squares 4B and 4C like the one below the in situ baking plate will be excavated in the upcoming week (the deposit has already been sampled for micromorphology).

Finally, we opened a new test trench in the northern part of the town area, just above the sandstone cliff (labelled SAV1 Northeast) – the aim is to check whether an eastern enclosure wall is traceable in this area or not. We are still just below the surface, but some remains of bricks and a promising sandy area were already revealed. Interestingly, Ramesside sherds were present among the ceramics.

Of course, work on the pottery and objects continued simultaneously with the excavation. From SAV1 West, 430 baskets of pottery were processed in 2016! But this is beaten by SAV1 East which yielded a total of 610 baskets… in retrospect, really amazingly large numbers of ceramics! Thanks to these amounts, the phasing and corpus from both sectors are now well established.

Our registrar Meg Gundlach was very busy with a considerable number of finds in the last week – one of the highlights from the town excavation in 2016 is definitely the scarab SAV1 East 1595. I was lucky to find it myself while cleaning the floor in one of the rooms attached to feature 51 in SAV1 East. The scarab beetle itself, made from steatite (12 x 16 mm), has been hacked off, leaving just the decoration on the back. A crudely carved winged cobra/vulture holds a shen-ring with her talons, protecting an empty cartouche in front of her. 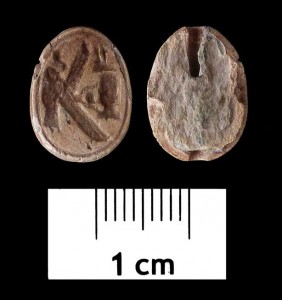 Week 6 will allow documenting and describing the excavated features in more detail; and we will also start our landscape survey in the area to the south of Gebel Abri. Very excited about the upcoming tasks and happy with the results so far!