Time flies by – the town season 2016 was officially closed yesterday and celebrated together with all workmen with a traditional sheep-dinner and party last night!

Week 6 on Sai Island focused on “cosmetic work” at SAV1 East – the complete area was cleaned for the final surface documentation, description of features and drawings. 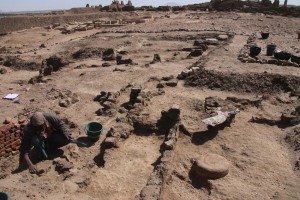 Specific areas and small features were excavated – most importantly a very interesting part of Square 4C with a newly discovered rectangular storage pit (feature 76) and impressions of two firing places for baking plates within the pavement associated with this feature. This is one of the rare cases were intact, undisturbed contexts from Dynasty 18 were documented at SAV1 East.

The final task at SAV1 East was to fully excavate feature 15. Wall 44, set into the cellar/feature 15, was carefully dismantled step by step, brick by brick. Although I proposed a dating for the building phases of cellar and wall already last year, firm proof was still missing as the deposit below wall 44 was not yet accessible. 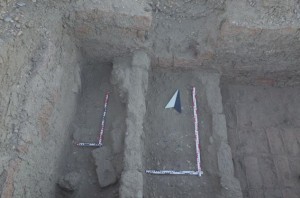 Wall 44, set into feature 15, was carefully removed in order to document the western part of feature 15 and the deposit below the wall.

Having now cleaned the entire feature, my preliminary assessment was strengthened: both the pottery and seal impressions from below wall 44 testify to a dating in the reign of Thutmose III. Thus, wall 44 was built into feature 44 not prior to the mid/late reign of this king – corresponding nicely to the proposed main building phases of Building A. 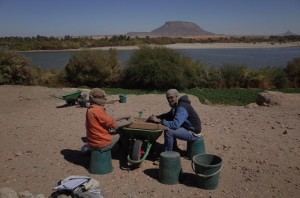 Sieving the undisturbed contexts in feature 15 was again very successful: a number of artefacts, most importantly seal impressions were found!

Excavations in test trench 1 in the new area SAV1 Northeast continued in week 6 as well – and the results are very promising: a substantial mud brick structure of mid-18th Dynasty date was discovered! Very likely the eastern enclosure wall of Sai city, enabling us to upgrade the town map! 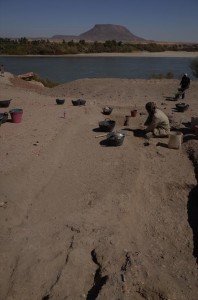 A more concise summary of the town season will follow – for now I would like to thank the team members who have already left the island (Jördis Vieth, Klara Sauter and Adrian de Vries): the data collected in the last weeks are extremely rich and will keep us very busy for a while!