Our colleagues working at Amara West just made a somewhat surprising discovery of dog-paw prints in one of their houses! This is the perfect opportunity to present one of the highlights of our season, coming from SAV1 West.

Dogs have been integral parts of AcrossBorders since our very first season in 2013 – over one hundred fragments of fire dogs were found and processed and a small puppy has grown up to become a faithful companion, proud mum and well-known representative of its species even beyond Sai Island. 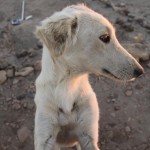 Dog bones are probably present in the animal bones from the New Kingdom town – small amounts were identified from 18th Dynasty levels in SAV1 North. However, discriminating between dog, jackal and fox bones is challenging and not always possible.

This season the first three-dimensional representation of a New Kingdom dog was discovered within the Pharaonic town! In Square 1 South, a small clay figurine (58 x 35 x 15 mm) was found. 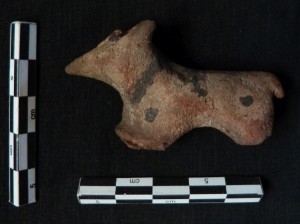 We christened the adorable figurine “Wastl” – Viennese dog owners will understand why! Wastl has a long snout, pointy ears and a small tail. He wears a black collar and his fur is decorated with black dots.

We are still discussing the original use and context of Wastl – some of us think that he is a small figurine and was possibly used as a toy in the 18th Dynasty. Dog figurines are not very common as small objects, but there are parallels from different periods and various sites (cf. Stevens 2006, 52). My first impression was rather a vessel application – especially because of the small width of the figurine and the broken legs despite the otherwise very good state of preservation. Furthermore, the back side of the figurine is less carefully made and not painted, suggesting a front side and thus not a use as an object. 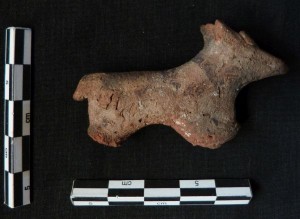 I am grateful to Anna Stevens of the Amara West team who supported this opinion during their visit last week – Anna pointed out large bowls with animal figurines attached to the rim found at Amarna (Stevens 2006: 177-178, fig. II.8.12). While there is no doubt about the identification of Wastl, the Amarna fragments are all broken and just “quadrupeds”.

May it be a figurine or a vessel application – Wastl clearly seems to refer to a domestic dog, emphasized also because of the collar. This opens many questions – was the presumed bowl with small dog applications just a decorative piece? Did it hold a symbolic meaning? Was it maybe even a dog’s bowl? Or was it of personal value for the owner, carrying specific memories from back home?

After eight weeks of absence, nothing is more understandable than the comfort playing with “other” dogs gives, but also pictorial reminders work fine… 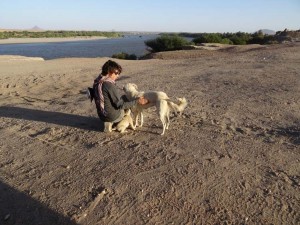 It is completely possible that Wastl belonged to one of the Egyptian officials sent off to Nubia who was a real dog-lover… He definitely managed to delight the AcrossBorders’ dog-lovers – like the other dogs on Sai Island! 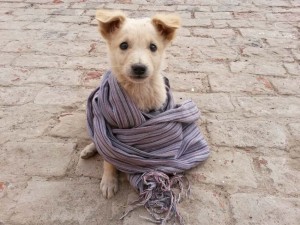 One thought on “More dogs from Sai Island”