While during the first two weeks the pottery coming from SAV1 West was not as abundant as last season, this has changed since we are working in the lower debris of the east part of Square 1South. 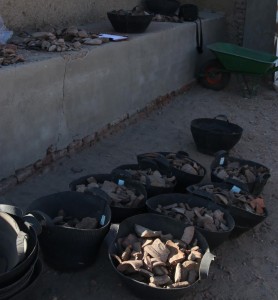 The sherds arrive in large baskets in the digging house.

This corresponds exactly to the findings in the respective area of Square 1: not only is the amount very large, but also the size of the sherds and the high number of complete profiles (especially of dishes and pot stands) is striking. Thanks to two of our workmen washing and sorting the sherds, the statistical analysis of the wares and vessel types is conducted. A detailed study and drawing of selected pieces will happen later in the season.

A selection of sherds gets washed for further processing. 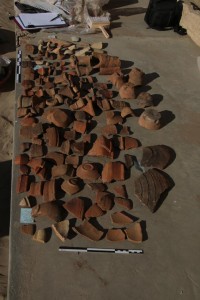 Remarkable are the considerable number of Nubian cooking pots, so-called fire dogs, fish dishes and painted wares.  Furthermore, a group of fragmented incense burners was found. These show traces of use, are smoked, with remains of resin in the interior and very often they are covered with a thin white wash. Painter’s pots were also discovered in the last days – the most frequent pigments are yellow, red and blue.

The pottery from the debris level we are currently working on is still partially mixed with Post-New Kingdom wares (c. 5-10 % of the material, especially Christian pottery), but the New Kingdom material is clearly late 18th Dynasty in date. A considerable amount of Thutmoside material is also present. All in all, the good state of preservation of the 18th Dynasty ceramics support our hope that some nice remains of possible multiple-phases of use are waiting for us in the eastern part of the squares at SAV1 West.