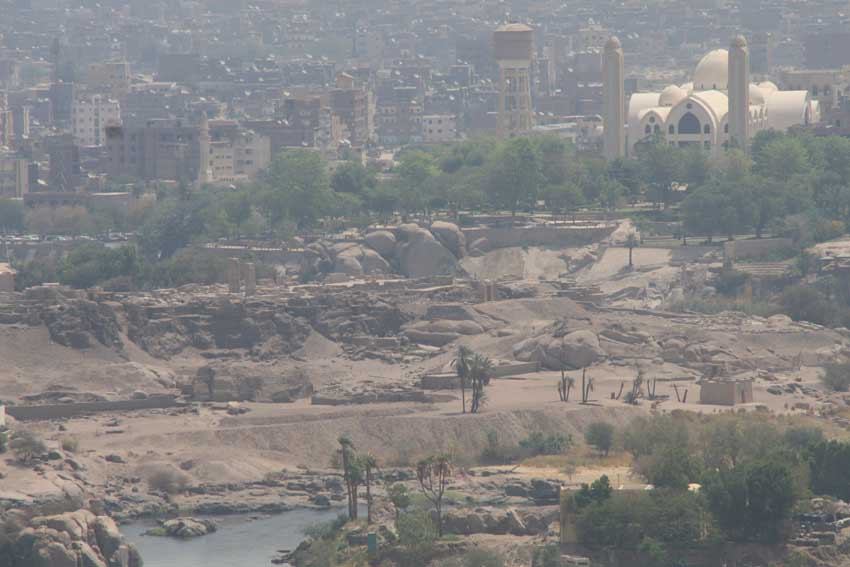 Remains of the ancient town in the southern part of Elephantine Island.

The importance of Elephantine as site with strategic value due to its location just north of the First Nile Cataract is well known. More than forty years of excavations by the joint German-Swiss mission have considerably increased our understanding of this beautiful island in Egypt’s South.

For a long period Elephantine functioned as base for Pharaonic expeditions to Nubia and as important trading point at Egypt’s southern border (cf., e.g., von Pilgrim 2010). With the so-called reconquest of Nubia, the Egyptian expansion towards the South during the 18th Dynasty, there was an increased demand for the transport of goods, materials and people to and from Upper and Lower Nubia. Elephantine flourished and gained significance during the early New Kingdom and especially in Thutmoside times.

Egyptian officials who participated in expedition and/or military campaigns towards the South had to pass through the First Cataract region. Obviously they spent some time there, at Aswan and Elephantine, before their departure to Nubia as hundreds of rock inscriptions attest (cf. Gasse/Rondot 2007; Seidlmayer 2003).

Further first hand testimony for the presence of these officials comes directly from the settlement of Elephantine – inscribed door jambs attest well-known individuals like viceroy Nehi. Of special interest is the context of these epigraphic sources: living conditions of people like Nehi traceable by the architecture and material culture. For the latter, ceramics are of high significance allowing reconstructing aspects of the daily life like food production and consumption and much more.

Within the framework of AcrossBorders, it is therefore of key importance that the 18th Dynasty pottery from Elephantine provides very close parallels to the corpus excavated at Sai (cf. Budka 2011). Within the next years, a detailed comparison of the two sites is planned and the ceramics form main elements of this study. This week, we just started our 2014 season of documenting and processing pottery at Elephantine thanks to our cooperation with the Swiss Institute Cairo and kindly supported by the German Archaeological Institute.

The focus is on material from the very early to the mid-18th Dynasty: Bauschicht/level 10 at Elephantine corresponds to levels 5-4 and the early phase of level 3 at Sai Island. Thanks to the stratigraphy at Elephantine, where several phases within one building from a certain building level are much better preserved than at Sai, a fine dating of the material from the earliest occupation at both sites seems possible in the near future.

Having just started to work with the material, the close comparisons are striking me once again: the main types of vessels are consistent at both sites and include carinated bowls and dishes, plates, footed bowls, stands, beakers and beer jars, cooking pots, storage jars, water jars as well as decorated jars and Nubian vessels.

Differences can be noted in small details – for example regarding the quantities of certain wares and fabrics or technical features of the finished vessels.  All in all, we have now a considerable amount of data and material and these are supporting my first assessment published in 2011: The comparison between the material from Sai and Elephantine and especially the imported Nile clay and Marl clay vessels at Sai suggest for at least part of the corpus a provenience from the First Cataract area illustrating the importance of Elephantine as trading point and for equipping expeditions and settlements located in the South (Budka 2011, 29) .

One thought on “Crossing borders: from Egypt to Nubia”