Having just read an intriguing article by Stuart Thyson Smith (Smith 2013), I would like to share some thoughts about the inhabitants of Egyptian sites in Nubia during the New Kingdom.

Talking about the range of people typically present in fortresses, Smith rightly states (2013, 269): “Fortress inhabitants usually included both women and children, who are typically neglected in favor of the adult men who performed the more obvious military, political and economic roles associated with these specialized communities.” Data from cemeteries and texts illustrate the presence of women and children in the communities of fortresses and fortified towns. Archaeological evidence from the settlements themselves provides further clues towards understanding the complex composition of the population. Smith presents his careful assessment of the demography, gender and ethnicity at Askut and stresses several aspects of identity issues in archaeology.

Interaction with local peoples is probably attested by the presence of Nubian ceramics at the major Egyptian sites – especially by Nubian cooking ware which could be connected with Nubian women. However, pottery and the coexistence of Egyptian and Nubian types and wares are not straightforward to explain but could reflect various aspects, e.g. a temporary or local fashion or indeed the cultural identity of their users. It becomes even more challenging to find traces of children in the archaeological record. Smith (2013, 274-275) has stressed useful ethnographic parallels and mentions gaming pieces as possible children’s toys and several productive activities like pottery making where children were probably involved.

Very much in line with Smith’s work, AcrossBorders is currently testing the potential of the analysis of material culture to inform for the question of a ‘Nubian’ or ‘Egyptian’ lifestyle within a New Kingdom fortified town like Sai. The identity of the occupants is central to this investigation and must include the complete population which was much more complex and dynamic than just adult men sent from Egypt.

Besides the archaeological finds like pottery and small finds from settlements, a group of inscribed door lintels and door jambs from Egyptian houses provides valuable information. Female persons are mentioned by names and titles on these monuments, indicating their real presence at the specific sites (Budka 2001, 74-75). One door jamb discovered during the 32nd season of the joint mission of the German Archaeological Institute Cairo and the Swiss Institute Cairo at Elephantine is particularly interesting: It belongs to a Ramesside official with the name of Hori (Budka and von Pilgrim 2008). His wife Nofret-irj is mentioned on another door jamb from Elephantine and a seated double statue of the couple is now kept in the Louvre, Paris (A 68). 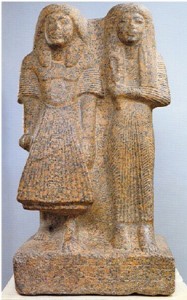 Statue of Hori & Nofret-irj, Louvre A68.

In this particular case we know, that Hori was coming from Thebes and lived in Elephantine for a certain time span. Common sense tells us that it is unlikely that officials like Hori went to their short-term contracts outside of their hometown without their families: They would have brought already existing wives and children with them. This is also supported by numerous rock inscriptions and stelae in the area of the First Cataract and in Nubia. At Sai Island, a Ramesside door lintel shows a seated couple as house owners; names and titles of wives of officials during the 18th Dynasty are still lacking from this kind of monument but might be unearthed in the future.

In conclusion, besides the very likely fact that Egyptian officials sent to Nubia in the New Kingdom found new partners (including indigenous Nubians) there and started a family in towns like Sai, we should not forget the possibility that men on duty were also accompanied by their already existing family. Individual choices whether an Egyptian wife and children came along on a short-term mission are likely and might become more visible with further work on the complete set of data from settlement sites.