The numerous fragments of bread moulds we discovered this year at SAV1E have already been mentioned. 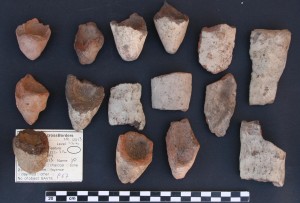 Several hundreds of fragments were found 2013, outnumbering the very small amount of less than a dozen from five years of excavations at SAV1N considerably. It seems logical to assume that this frequent appearance of bread at SAV1E is connected with the neighbourhood to Temple A, located just 30 meters towards the South.

This might also be supported by the fact that a larger amount of bread moulds came to light in the southern part of SAV1E, especially in Square 2B.

Helen Jacquet-Gordon has published a “Tentative Typology of Egyptian Bread Moulds” in 1981. 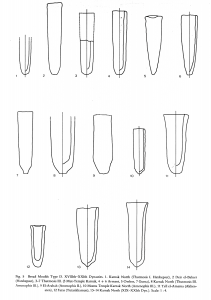 Our moulds from SAV1E (and the small number from SAV1N) correspond to her type D – New Kingdom versions of tall, tube-like shape. They are in general very slender with rounded bases – but a prolongation at the bottom appears as well, sometimes with a kind of button-base, but more often with a marked point at the base.

The exterior of the vessels is often very asymmetrical – they are handmade, formed around an inner core/mould, resulting in irregularly shaped direct rims (cf. Rose 2007: 143). The dimensions of the bread moulds from SAV1E vary, but most are between 20-30 cm in height with a diameter of around 5-6 cm. 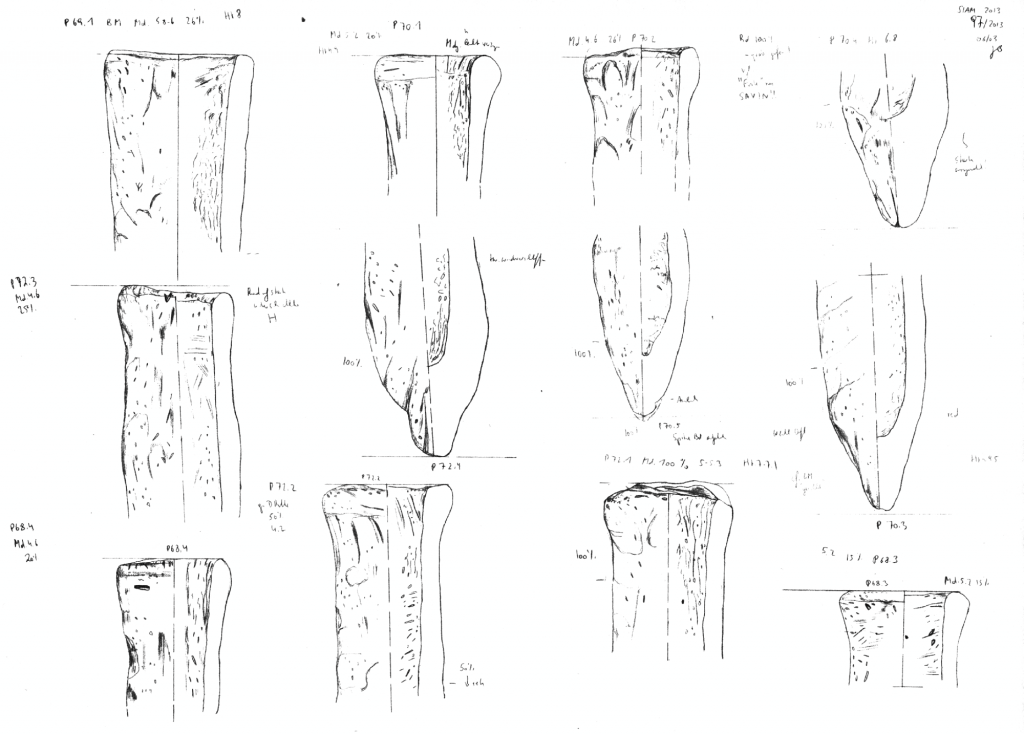 Field drawings of some of the bread mould fragments from SAV1E.

As Jacquet-Gordon has shown very clearly, this type of bread mould is associated predominantly with New Kingdom temple sites (1981: 19-20), but occasionally also found in tombs and at settlement sites like Amarna (Rose 2007: 143, 288, HC2) and Elephantine. In the case of the latter, very small amounts appear in strata of the New Kingdom and it cannot be ruled out that they are connected with the local temples of Khnum and Satet.

It has to be stressed that a later variant of bread mould type D, labelled by Jacquet-Gordon as type E, is frequently found at Napatan and Meroitic sites in Sudan (e.g. at Kerma, Gebel Barkal, Kawa, Sanaam and Tabo). These moulds are characterised by a more flared shape and a larger mouth diameter, usually less tall than types D. The elongated point of the bases of this type of mould seems to be directly related to the pointed bases of the New Kingdom variants as illustrated at SAV1E. The date of the latter as 18th Dynasty is nevertheless certain as they find close parallels in stratified material at Elephantine (personal observation) and also at Tombos (Edwards 2011: 78, Fig. 3.32). The moulds at Tombos were found in the fill of an 18th Dynasty tomb (TMB005/1) just next to the famous tomb of Siamun (TMB005), recently excavated by Stuart Thyson Smith (see Smith 2003). Interestingly, from the 18th Dynasty tombs on Sai Island, the small number of ceramic objects identified as bread moulds are of a distinctly different form, more closer to Jacquet-Gordon’s type E (Minault-Gout/Thill 2012, Part I: 339, Part II: 136, Pl. 130).

All in all, the large quantities of bread moulds found in 2013 at SAV1E might enable us in the future to reassess in more detail the development of New Kingdom types down to Napatan and Meroitic times, with a special focus of potential local variations in Upper Nubia.

Edwards, D. N. 2011. The Third-Second Millennia BC. Kerma and New Kingdom Settlements, in: A. Osman/D.N. Edwards, The Archaeology of a Nubian Frontier. Survey on the Nile Third Cataract, Sudan, Bristol, 59-87.

2 thoughts on “Bread Moulds from SAV1E: An Update”