Temple towns, also known as fortified towns, are a special phenomenon according to studies dealing with settlement patterns and urbanism in ancient Nubia during the New Kingdom. In most cases the published works in question are general overviews, introductions or entries in encyclopediae concerning the archaeology of ancient Egypt. Following these studies, Egyptian stone temples as well as enclosure walls were major features of New Kingdom settlements in Nubia, like Sai Island. Because of these two major elements such sites are typically called temple towns or fortified towns (e.g. Heidorn 1999; Welsby 2001; Bard 2007; for actual fortresses and military bases in New Kingdom Egypt see Morris 2005). 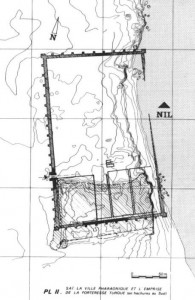 Presumed layout of the New Kingdom town of Sai after Azim 1975.

Kemp was one of the very first scholars, who dealt with these special settlement structures and presented the then almost generally accepted model of how a fortified town in Nubia has to look like (Kemp 1972a). The design of the towns is assumed to have been fairly uniform and they were enclosed with a mud brick wall as a rule. The internal structure was basically dominated by three types of building: a stone temple of characteristic Egyptian design as well as domestic and administrative mud brick buildings, including the civil government residence (Kemp 1972a: 653). As references Kemp cited only the settlements at Amara West and Sesebi, reflecting the restricted state of knowledge and publication back in the 1970ties.

At present, we know much more about settlements and towns founded or being reoccupied in the New Kingdom in Nubia – all of which received the designation of a temple town. Most probably the labelling is solely based on the existence of a temple. None of the authors seem to respect the other features postulated by Kemp. Furthermore, from the published works, it is impossible to say how many of these sites have been labelled as a temple town, as the opinions range from only three temple towns (Welsby 2001, Bard 2007) to 28 (Zibelius-Chen 2013)! Another contentious issue is the motivation for its development: was this due to political and religious factors (as proposed, e.g.  by Morkot 1993, 2001; Spence 2004; Bard 2007 and Zibelius-Chen 2013) or to purely economical ones (Trigger 1965; Kemp 1972a, 1972b; Heidorn 1999)?

As one can see there is much potential for a new consideration of the topic of the so-called temple towns starting with a fresh evaluation of Kemps model from 1972 considering the current state of research to the general question how a city or town has to look like for the Egyptians in Egypt and in turn in Nubia (the so-called town problem, e.g. Bietak 1979). Special attention has also to be given to the question whether some or even all of the refurbished and reoccupied Middle Kingdom-fortresses have been taken into account speaking about New Kingdom temple towns, like obviously Zibelius-Chen is doing (Zibelius-Chen 2013). 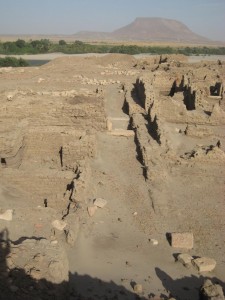 View of part of the New Kingdom Town SAV1 at Sai.

Especially Sai Island is one of the most interesting settlements among the potential temple towns or fortified towns as it was the first newly established town founded most probably by Ahmose. With all of its strategic advantages, Sai served as a bridgehead during the further expansion into Nubia (Davies 2005). As recent fieldwork has clearly illustrated, we are far away from understanding the complete layout and development of the New Kingdom town of Sai. How did the very early town founded by the Egyptians look like? Was there a predecessor for the Egyptian Amun temple built by Thutmose III? All of these questions are currently investigated by AcrossBorders.

Thus Sai fits perfectly into my envisaged PhD-Thesis at Humboldt-University Berlin briefly summarized here and I am very happy and grateful to Julia Budka, not only for her supervision of my PhD, but also for giving me the great opportunity to work as a PhD-researcher in her fantastic project. I am very pleased to have joined the AcrossBorders team!

Bard, Kathryn A. 2007. An introduction to the archaeology of Ancient Egypt. Malden, Mass: Blackwell Publ.

Kemp, Barry J. 1972a. Fortified towns in Nubia, in: Peter J. Ucko & Ruth Tringham, et al. (eds.), Man, settlement and urbanism. Proceedings of a meeting of the Research Seminar in Archaeology and Related Subjects held at the Institute of Archaeology, London University. Gloucester. 651–656.