The preparation of the upcoming 2014 field season is getting more and more advanced – new equipment was bought or at least ordered, including a new workstation with the fabulous software aspect3D (“Photos become 3D models – REALTIME”), a brand new Canon EOS 70D and other material for the excavation at Sai Island. Tomorrow, there will be a meeting held at Lille to finalize the schedule and to talk about future plans for research on the New Kingdom at Sai.

Very soon I’ll be booking the flights and practical information will be distributed among the fieldwork team members. All of them have been already informed about the nimiti and the strength they take… It was also hard to keep them a secret as this blog is full of pictures with people carrying handsome head mosquito nets, :-)! To lift our spirits, I would once again like to come back to Herodotus and the wealth of information he has left for us with his “The Histories”. In an earlier post I have given a translation of Book Two, 95 referring to mosquitoes. A few weeks ago the brilliant new translation by Tom Holland was published – it’s an absorbing new edition which I really enjoy flipping through (not yet enough time for proper reading…) and would recommend to every lover of the Ancient World!

Here is the mosquito paragraph in the new translation by Tom Holland (Herodotus. The Histories, Penguin Classics, London 2013):

Book Two, 95: “Various methods have been devised by the Egyptians to cope with the swarms of mosquitoes. Those who live south of the marshes benefit from the towers which they climb before going to sleep, for the winds ensure that the mosquitoes fly close to the ground. Those who live beside the marshes, however, have to make other arrangements. Every man among them possesses a net which during the day is used for fishing, but at night-time is put to an alternative use. First, its owner drapes the net over the bed in which he plans to take his rest, then he slips underneath it and goes to sleep. It is no use going to sleep wrapped up in cloth or linen, for mosquitoes can bite straight through them. Through the net, however, they do not make an attempt.” (Holland 2013, p. 145)

The last sentence is the most important one if we transfer this account to modern Sudan and to nimiti bothering us during the day – “Through the net, however, they do not make an attempt!” – insha’allah! 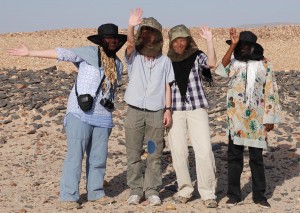