We made very good progress working in Tomb 26 this week. Excavation and cleaning continues in the western, “hidden” Chamber 5 and in the northern, lower Chamber 6.

In Chamber 5, the southern third of the chamber has been cleaned, revealing 2 in situ burials in extended position, oriented East-West. The second burial was badly smashed below debris from the roof and partly covered with collapsed plaster. Ceramic vessels and other finds had been placed at both the feet and the head – the most remarkable  new find from this week is a nicely worked heart scarab! This piece is still left in situ, as are all the other finds and human remains – if space allows it, we would like of course a final SFM documentation of all burials in the chamber. A minimum of 4 more burials are still waiting for us!

Chamber 6 is getting more and more exciting! We have finally reached the base of the trench giving access to this chamber – the chamber itself is only 80-100 cm high and with an east-west extension of 220-230 cm quite small. However, and these are the big news from this week, large enough to hold 2 wooden coffins and 2 burials! 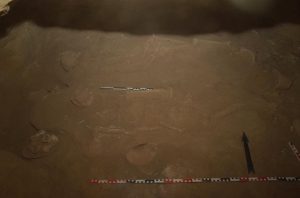 Chamber 6 with remains of two burials placed in wooden coffins.

The remains of the coffins, placed with the head to the west, parallel to the side walls, are very fragile – decayed wood, faded plaster remains and traces of blue, white, yellow and red were documented. Best preserved are the head parts of the two coffins. In each of them, the skull is a bit misplaced – possibly because of all the sediment/water floods that filled the chamber until the top.

As already announced earlier this week, a small cluster of miniature vessels and more flower pots were used as burial gifts in Chamber 6. The biggest discovery, however, was made yesterday, just before lunch time: between the two coffin heads, two stone vessels and a broken flower pot appeared a few days ago. While cleaning them and the outline of the northern coffin, I found another object made in stone: a beautiful stone shabti, lying on its side looking towards the northern coffin!

It’s a very high quality product, finding parallels in the 18th Dynasty tombs excavated by the French mission in SAC5. The shabti in Chamber 6 is of course still in place and not completely cleaned, thus the inscription is not yet readable in total. But the name of its owner is already visible and for the AcrossBorders project, it is simply perfect: he is a wab-priest with the name Khnum-mes, thus a very nice indirect reference to the First Cataract region and AcrossBorders’s other working site in Egypt, Elephantine!

The newly discovered shabti of Khnum-mes.

Much to look forward to in the upcoming week! For now, we’re having a well-deserved weekend after a busy week full of excitement and important discoveries.