Among the important and well-known early travellers and explorers of the Nile is the Italian Ippolito Rosellini – contemporary and friend of Jean-François Champollion and famous for his publication Monumenti dell’Egitto e della Nubia (published as 10 volumes in Florence, 1832-40). His Franco-Tuscan expedition is currently subject of one of the research projects at the University of Pisa. Back in June 2012, an international colloquium was held at Pisa and published in 2013: “Ippolito Rosellini, travellers and scholars of the 19th century in Egypt” highlighted different aspects of the importance of these early studies for modern Egyptology and our present research.

Rosellini was born in Pisa and got his professorship there – in fact he held the earliest chair in Egyptology (1826). I am very happy to be travelling to this beautiful city of Toscany tomorrow for a guest lecture. I will speak – great surprise – about Nubia in the New Kingdom – and this fits perfectly to the long tradition of the department currently headed by Marilena Betrò: The mission of the University of Pisa was working under the directorship of Michela Schiff Giorgini from 1957-1963 at Soleb – one of the most important Upper Nubian temple sites which we regularly visit during our field seasons at Sai Island. 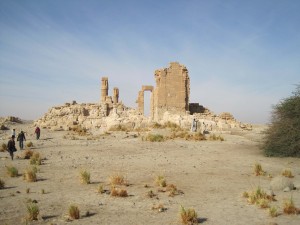 The magnificent temple of Soleb never fails to amaze me – having visited it first in 2000, it’s always a pleasure to come back to this monument build by Amenhotep III and dedicated to Amun-Re of Karnak and to a local manifestation of the deified king as “Lord of Nubia”. 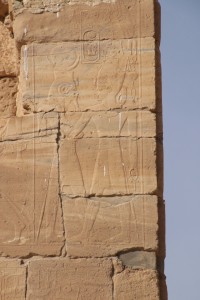 Amenhotep III and the deity “Nebmaatre, Lord of Nubia”, relief at Soleb.

Thanks to the Qatar-Sudan Archaeological Project there are currently plans for site management and a new visitor centre in the old excavation house of Michela Schiff Giorgini – a very positive development which will certainly contribute to an even higher appreciation of the place by the local communities, tourists and other visitors. 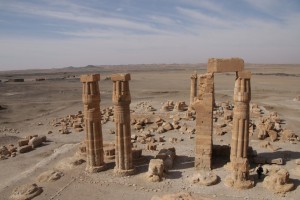 Some of the still standing columns of the peristyle court – closely resembling the ones of Amenhotep III at Luxor temple.

Soleb probably replaced Sai Island as administrative centre of Upper Nubia in the later 18th Dynasty – details are here still unclear, especially because the town area of Soleb has never been archaeologically investigated! Work always focused on the temple and the close-by necropolis.

From Soleb now to Pisa – 2014 is definitely full of intriguing travels connected with ancient Nubia!